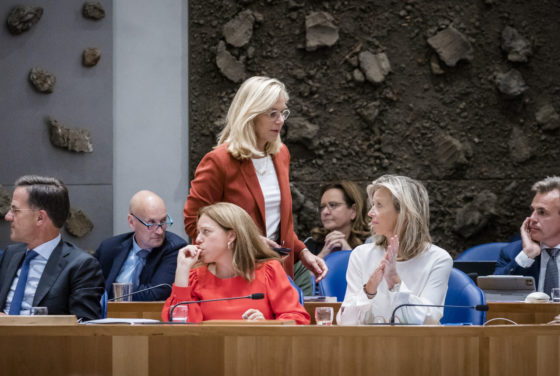 Finance minister Sigrid Kaag branded Forum voor Democratie leader Thierry Baudet a threat to Dutch democracy after his claims that she attended a ‘college for spies’ disrupted the opening day of the budget debate.

Kaag led a walkout by the entire cabinet after Baudet began his contribution with a tirade about St Antony’s College in Oxford, where Kaag obtained a master’s degree in international relations in the 1980s.

As Baudet began describing the college as ‘a training college for the western secret services’ and ‘globalist elites’, Kaag rose from her seat and left, quickly followed by the rest of the ministerial team, including prime minister Mark Rutte.

‘It’s not just about tonight and it’s not just about me,’ Kaag said after the first day of the debate concluded in the early hours. ‘The wider story is about radicalisation. These are the voices of the extreme right.’

She said Baudet’s comments were consistent with a pattern of ‘half-truths, framing and in this case, obviously, peddling a half-baked story on behalf of a dictator,’ alluding to Baudet’s support for Russian president Vladimir Putin.

Baudet was expelled from the chamber on Monday evening by parliamentary chair Vera Bergkamp after he pressed ahead with his speech, ignoring Bergkamp’s demands to return to the subject of the debate.

Rutte: ‘There are limits’

Rutte backed his colleagues’ decision to leave the debating chamber, an unprecedented move which forced Bergkamp to suspend the debate, as at least one minister has to be present.

‘Getting up and leaving the room was our way of showing what we thought,’ Rutte said. There are limits to what you can accept.’

Baudet had been silent for the first six hours of Monday’s debate while other leaders grilled Sophie Hermans, parliamentary leader of Rutte’s VVD party, on the details of the coalition’s 2023 budget.

Baudet had been due to speak later in the evening, but asked for his slot to be brought forward because his partner was due to give birth. His intervention dominated the late news bulletins.

Forum voor Democratie won eight seats at last year’s general election, but was reduced to a rump of five within weeks after Wybren van Haga, the party’s number two candidate on the electoral list, walked out, taking two colleagues with him.

On the second day of the debate on Tuesday, ministers will respond to the issues raised by MPs on the first day.