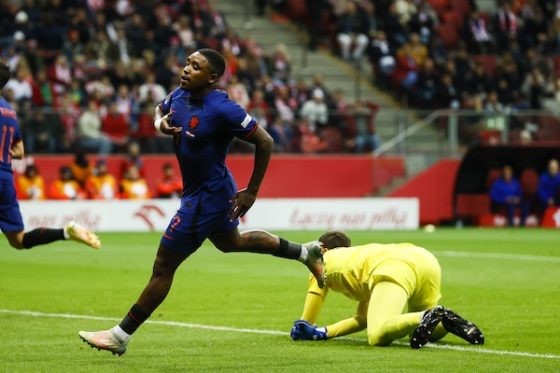 A 2-0 away win against Poland has put the Netherlands within one point of winning their Nations League group, with the Dutch only needing a draw against Belgium on Sunday to reach the four-team finals.

Cody Gakpo scored early for the Dutch and Steven Bergwijn then added a second in the 60th minute.

The Dutch have now won four of their five League A Group Four games and are three points ahead of Belgium, who beat Wales 2-1.

‘I told my players that I want more pressure from them generally – not only inside our half, but also in the opposition one,’ coach Louis van Gaal told the Uefa website after the game.

‘They did it tonight. That is why it was so difificult for Poland to play against us. Again, I am very happy with how we played and our defence.’

Thursday night’s match was the second-last chance for Van Gaal to finalise his team and his system before the World Cup kicks off in Qatar in two months’ time.