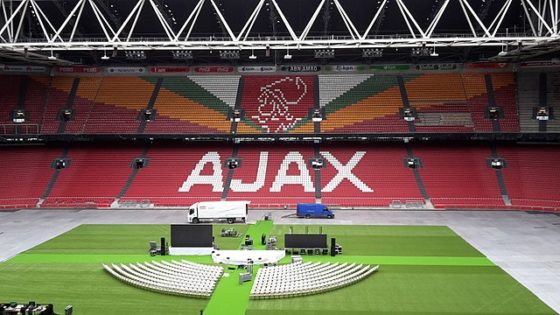 The Johan Cruijff stadium is home to Ajax. Photo: Scottbrl90 via Wikimedia Commons

Ajax began its Champions League season with an emphatic victory over the Glasgow Rangers on their home turf at Amsterdam’s Johan Cruyff Arena. The team’s four goals were scored by Edson Alvarez, Steven Berghuis, Mohammed Kudus and Steven Bergwijn.

‘Apart from the tactics – which I think is the least important – I am most happy with the way we were on the field, as a team, with good energy, with the drive to go the extra mile for each other, that we take over from each other defensively,’ said Ajax coach Alfred Schreuder, who made his debut as head coach at Europe’s highest football level.

The Rangers had managed to keep PSV out of the Champions League two weeks ago, but they were no match for Ajax, which after Wednesday’s win put them in the lead of group A—Ajax, Rangers, Liverpool and Napoli—after one round of play.

Player of the match

The Amsterdammers took the lead 16 minutes in when Edson Alvarez scored from a Dusan Tadic corner. The night’s second goal came just after the half-hour mark against a sluggish Rangers defence. Mohammed Kudus made the score 3-0, with the 22-year-old Ghanian spinning away from his defender and with an unstoppable drive culminating in a left-footed finish.

‘I’ve been working in training on my finishing, so I’m very happy it worked out during the game,’ Kudus, the player of the match, said of his goal.

‘The match was already decided after 35 minutes,’ said Rangers coach Giovanni van Bronckhorst after the game. ‘We achieved a higher level against PSV, especially in the away game. But the difference is also that Ajax puts pressure on faster… and is also more agile. In addition, Ajax has been participating at Champions League level for years, and can compete with the better teams. My players are not used to this.’

The fourth goal was scored 80 minutes in as Steven Bergwijn skipped past Rangers’ goalkeeper Jon McLaughlin before steering the ball into an empty net.

Although the crowds were ecstatic, Amsterdam police say there was no game-time violence. In a preventive measure, the city had implemented a stop-and-frisk policy for the match and restricted alcohol sales in the Red Light District.

Twenty-three supporters, including one Scottish man, were arrested Wednesday afternoon and early evening, with two Dutch supporters remaining in
custody.

Ajax next take on Liverpool at Anfield stadium on 13 September.