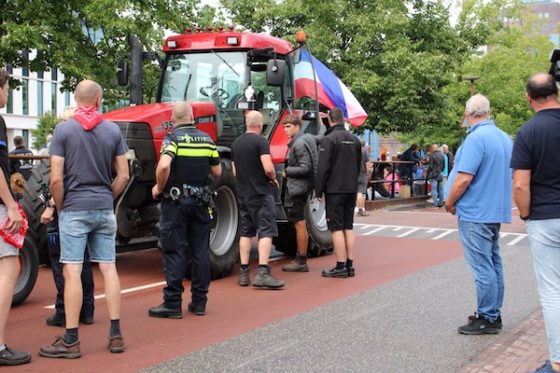 Trouble broke out during a demonstration by farmers in front of Almelo town hall on Monday, forcing the mayor to invoke his emergency powers for the town centre, local media reported.

A number of farmers and their supporters had gathered at the town hall, where an upside down Dutch flag had been painted on a wall. A reversed flag has become a symbol of the farmers’ protest.

According to local broadcaster RTV Oost, the town council had agreed to remove the flag, arguing it was a political statement.

No official permission had been requested for the demo, but council officials said it could go ahead with a maximum of 500 people on the other side of the canal.

As yet it is not clear how the trouble started, but video footage shows a handful of police attempting to make what appeared to be an arrest before being driven off by a group of demonstrators, some wearing the red scarves which have also become a symbol of the protests.

Anti-coronavirus vaccination campaigner Willem Engel was also among the crowd.