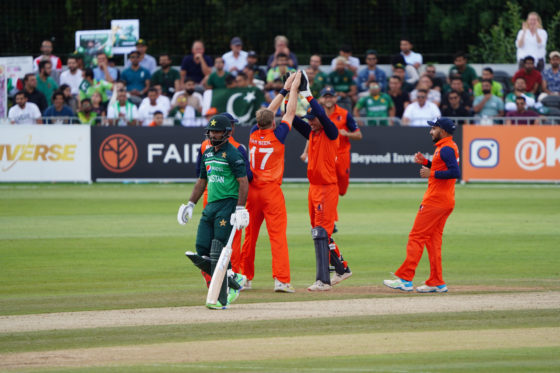 Pakistan’s bowlers held their nerve to seal a thrilling nine-run win over the Netherlands in
the final one-day cricket international on Sunday and complete a 3-0 series sweep in Rotterdam.

Naseem Shah, who bagged his maiden ODI five-wicket haul, and Mohammad Wasim shared nine wickets between them to clinch victory in the final over in front of a sell-out crowd as the Dutch batters failed to overhaul a modest target of 207.

Pakistan won the toss and elected to bat with a raft of changes to their line-up in a bid to test their bench strength. The Dutch handed an opportunity to brothers Musa and Shariz Ahmed as they looked to finish their home summer on a high.

On a slow pitch, Babar Azam hit a composed 91 off 125 balls, but nobody else scored more than 27 as the Dutch bowlers produced a strong showing to bowl out the visitors for 206.

Vivian Kingma (2-15) once again struck early with the new ball to dismiss the debutant opener Abdullah Shafique. Bas de Leede ran through the lower middle-over to snare three wickets and Aryan Dutt, as he so often has through the summer, claimed the big wicket of Azam with a superb one-handed catch to derail Pakistan’s momentum.

Logan van Beek, who largely bowled through the middle and death overs with little success in the series, was impressive with figures of 1-33 from nine overs as he put a leash on the scoring rate and didn’t let the Pakistani batters break free as they hobbled to a paltry total with two deliveries unused.

In response, the Dutch got off to a cautious start and found themselves three wickets down for 37 at the end of the 14th over. Max O’Dowd was caught at second slip before Musa Ahmed was undone by a full delivery from Naseem Shah from round the wicket to hit the top of off stump.

De Leede’s wicket prompted a circumspect approach to rebuild the innings and Vikramjit Singh buckled down with Tom Cooper in a fourth-wicket stand of 71. Singh struck his second half-century of the series, hitting seven boundaries, but his dismissal in the 31st over was soon followed by that of skipper Scott Edwards to leave the hosts reeling at 116-5.

Cooper (62) then teamed up with Teja Nidamanuru, who hit 24 to bring the target down to 35 runs off the last five overs. However, the duo’s dismissals five balls apart thwarted the Dutch comeback and handed Pakistan the advantage.

After the 39th over, the Dutch batters failed to hit a single boundary for 63 deliveries until Dutt got one away in the final over. It proved to be too little too late.

‘Incredibly proud of the boys. It’s a hell of an effort we put out there,’ Edwards said after the game.

‘It’s disappointing again we couldn’t get over the line. In terms of where it went wrong, a little bit of inexperience at the backend. We were well on track but a couple of dismissals just cost us in the end.’

It capped an unprecedented season that saw cricket travel across the country right from the leafy suburbs of Amstelveen, where the Dutch hosted West Indies and England to The Hague for two Twenty20 (T20) internationals against New Zealand and finally down the A4 to Rotterdam.

‘It caps off what the summer has been,’ Edwards said. ‘There’s been a lot of improvement from the boys but yeah, [there were] probably three or four chances throughout the summer to get a win on the board and we just couldn’t quite get over the line.’

Rather than dwelling on the absence of senior players, the likes of head coach Ryan Campbell, interim head coach Ryan Cook, and captains, Pieter Seelaar and Edwards, will look back fondly on the development and rise of young faces in Vikramjit Singh, Aryan Dutt and Bas de Leede.

With the World Cup Super League set to be scrapped after the current edition, it is unlikely the Dutch will enjoy another summer of high-profile fixtures but under the new Future Tours Program cycle that runs until 2027, the Dutch are the only Associate nation to have secured a confirmed series against Pakistan in 2024.

The Netherlands will now turn their attention to the T20 World Cup in Australia in October before away tours to Zimbabwe and South Africa to complete their Super League commitments before March 2023.