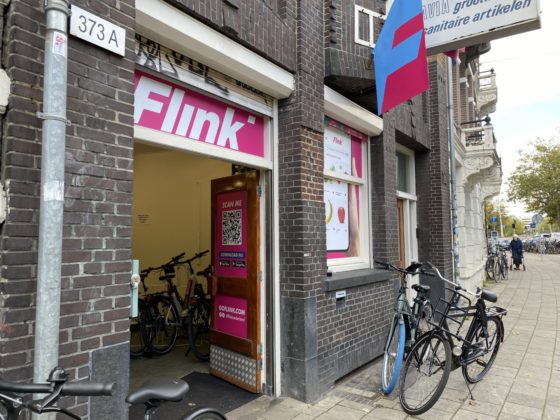 Amsterdam has ordered two Flink and Getir locations in West to close by September 14 or face a 20,000 euro fine.

The city ordered the two locations – on the Nassaukade and Da Costakade – to shut in July but both locations installed customer counters in response to the order. The so-called ‘dark stores’ serve mainly as distribution centers for rapid delivery services.

Both Getir and Flink appealed the decision, arguing that with customer checkout counters the shops should be considered grocery stores. But following checks at both locations, the city said the stores ‘mainly serve as a distribution center for flash delivery.’

In the last two years, a stream of companies have opened, offering deliveries of everything from alcohol to biscuits ‘at your door in minutes’. Customers order through an app on their mobile and (electric) cyclists speed through the city to take the goods from storeroom to sofa as quickly as possible.

Area residents have been waging a battle against the businesses, which they claim are a nuisance in residential areas. ‘The problem is noise nuisance, throughout the whole day, and traffic safety,’ resident Joost Munning, who collated a complaint from 115 locals last November, told Dutch News.

The city argues that the stores violate zoning guidelines, which control what businesses can operate in certain locations. ‘The policy established by the council is to protect liveable neighbourhoods. These two locations do not meet this basic principle,’ deputy mayor Reinier van Dantzig said in a press release.

Amsterdam is now looking to ban all dark stores from residential neighbourhoods, limiting them to areas of business terrains. The companies oppose this as it puts them further from their customers.

A new city order says that if Flink and Getir do not close the locations by September 14 they face a €20,000 fine. A spokesperson for Flink told Het Parool they plan to file a lawsuit against the order.

Two other flash delivery companies, Gorillas and Zapp, lost lawsuits over similar orders earlier this year. Zapp has since stopped operations in the Netherlands citing uncertainties due to changing rules and regulations.