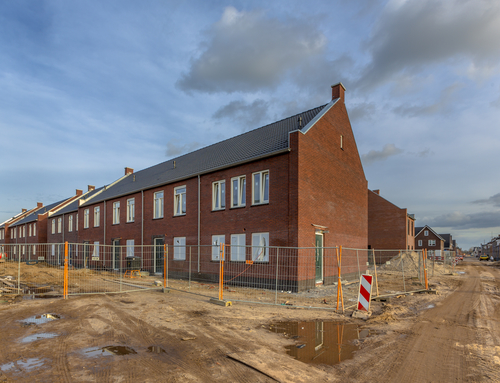 The downturn in building new owner occupier properties first recorded at the end of last year is continuing, according to research by Delft University.

In the first quarter of this year, just 4,500 new owner occupier homes were completed and 5,500 were bought – back at the level of the 2013 financial crisis, the university says in a new report.

In addition, new building permits do not suggest any improvement in the short term. Councils have handed out fewer building permits in the first five months of this year, with the owner occupier sector down by 20%.

‘It is worrying,’ housing market professor Peter Boelhouwer told NOS radio. ‘If fewer new homes are available, that will have a negative impact on the rest of the market.’

Boelhouwer also says that demand for the properties which are being built is down because they are expensive, due to high building costs, and their location. ‘Local councils are going for expensive city flats but developers want to build on the edge of cities, and are not being given the opportunity to do so,’ he said.

Developers and investors have warned that government restrictions on the amount of owner-occupier property they can build, plus plans to increase rent controls to some 90% of the rental sector, are hitting new projects hard.

The government has said it wants to increase the current housing stock by 900,000 new homes by 2030. ‘If you look at building permits for the coming two years, it is not looking good,’ Boelhouwer said.