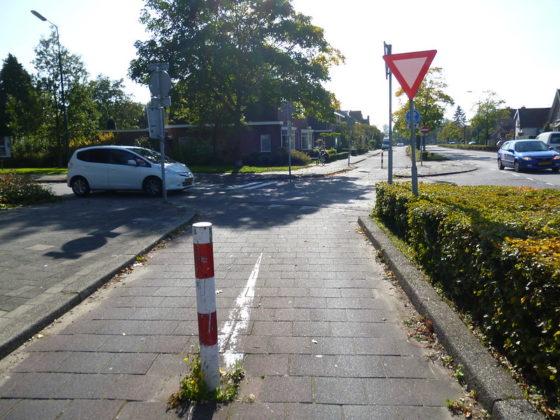 Bike lane posts are a danger to cyclists and all 200,000 still dotted about the country should be removed, traffic safety organisation VNN and cyclists’ union Fietsersbond have said.

Most of the posts serve no purpose at all, the organisations claim, and only cause accidents on overcrowded bike paths. There are no figures to show just how many people end up in hospital as a result of crashing into a post.

‘When there is lots of traffic on the bike path cyclists often have to resort to crazy manoeuvres to stay in the saddle because of the posts,’ VVN spokesman Rob Stomphorst told the Telegraaf. ‘And with the different types of bike allowed on bike paths and the different speeds, we need to get rid of these unnecessary obstacles.’

According to the bike policy expertise centre CROW, half of the offending posts have already disappeared but some 200,000 remain across the country.

‘The posts are meant to keep motorists from parking their cars on them, or using them as a short cut. But it seems as if councils have just been putting them in as a matter of course. That has now stopped but we are still left with the consequences,’ CROW spokesman Otto van Boggelen told the paper.

The Fietsersbond is starting a campaign this month to chart all the posts and ask for their removal or a plastic replacement which is clearly visible. The organisation also wants a better registration of accidents involving posts.

In Amsterdam the council has already removed half of its 4,000 poles and put in surface marking to warn cyclists when a post – and a potential collision-  is imminent.