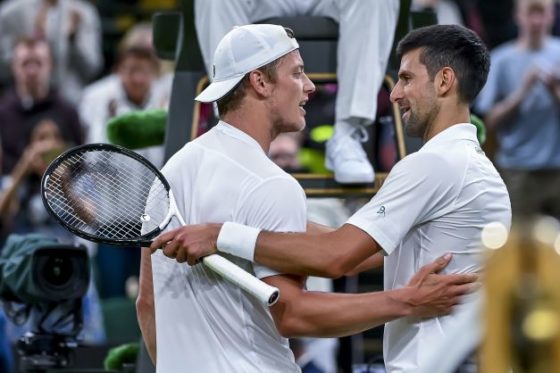 The eight-match winning streak of 25-year-old Dutch wildcard Tim van Rijthoven ended on Wimbledon’s Centre Court on Sunday night as Serbian Novak Djokovic ended his Grand Slam dreams with a four-set win in the fourth round.

Van Rijthoven says Djokovic praised him when they met at the net after his victory. ‘I said that he inspires me and that I thought it was a great honour to be on the track with him,’ said van Rijthoven. ‘I think he said back that I have a “very bright future” ahead of me. That’s nice to hear from him.’

Van Rijthoven said he ‘can take a lot of confidence that it took Djokovic to stop my series.’

Just last month, van Rijthoven was ranked 205th in the world. But his shock victory over world number one Daniil Medvedev at the Libema Open in ‘s-Hertogenbosch helped him move up to 104th seed in the men’s tennis rankings.

The crowd was visibly thrilled when van Rijthoven won the second set, in no small part due to his smashing forehand and powerful serve, with one of his 20 aces clocking in at 133 mph. Despite his loss (6-2, 4-6, 6-1, 6-2), van Rijthoven called the Centre Court atmosphere ‘fantastic.’

‘To hear so many people shout “come on Tim” was really cool, and that on the most beautiful court in the world. When I got on the court, I had to orientate myself and take it all in. That caused a bit of nervousness in the beginning, but I grew better and better in the game,’ he said.

But in the end, he was no match for the world’s number one, who has not lost a singles match at Wimbledon since he retired injured from the quarter-final in 2017.

As for van Rijthoven, he says he’ll take a few days to regroup before heading to the grass courts of Newport. Then it’s on to the hard courts of the US Open. ‘My first goal now is to be in the top 100, because that means qualifying for the main tournament of the grand slams,’ he said. ‘And that is basically what you always want.’