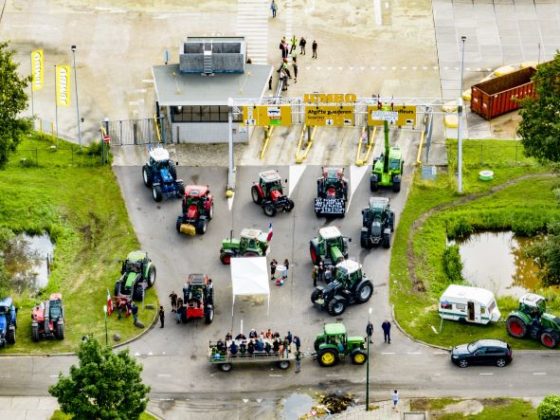 A protest at a Jumbo centre in Woerden  Photo: Robin Utrecht ANP

Dutch police used teargas and dogs to break up some farmer protests on Monday night, gave around 200 fines and made several arrests.

Riot police were called into Heerenveen, where farmers protesting against environmental policy were blocking a Lidl distribution centre with tractors, and used teargas to clear the area. Three people were arrested, according to NOS.

Police also ended a blockade at a centre in Sneek, with Dutch media reporting that others had joined in who were not ‘normal protesters’. Several other protests dispersed early on Tuesday morning.

However, some supermarket distribution centres were still being blocked off by farmers on Tuesday, with the Coop warning of ‘massive food wastage and empty shelves’ and concerns raised about a safety risk with a bridge blockade in Groningen.

Farmers are angry at the prospect of having to shrink livestock numbers in order to meet new pollution targets announced in June. Nitrogen-based emissions will have to decrease by from 12% to 95% in Natura 2000 nature reserves, according to a government map. This affects farmers because manure and farm fertiliser are major sources of pollution.

Mark van den Oever, chairman of protest group the Farmers Defence Force, said that the government policies are unacceptable. ‘The measures just go way too far,’ he told programme Nieuwsuur in June. ‘Technical solutions just aren’t possible in zones in and around nature reserves. So whole areas are going to be swept empty. My supporters are extremely concerned about this. They have their backs against the wall.’

At the weekend, farmers were threatening to bring the country to a standstill, reported the AD, however police have said that so far the protests have brought limited disruption.

The blockades are the latest in weeks of protests after new policy aims were announced in June. Last week, there were at least 10 arrests after farmers attacked police cars, dumped a lorryload of manure on the doorstep of nitrogen policy minister Christianne van der Wal, and blockaded family the ice cream factory of MP Romke de Jonge in the northern province of Friesland.

Dutch prime minister Mark Rutte last week condemned some protesters for going ‘over the limit’ and the government said mediator Johan Remkes will be appointed to take discussions with farmers further.

The appointment is a controversial one, however. Caroline van der Plas of the BoerenBurgerBeweging said Remkes, a VVD member and involved in a report on the nitrogen problem in 2020, could not be regarded as unbiased.

Although nitrogen is an inert gas, it can be highly polluting in compounds such as ammonia, nitrogen oxides and the greenhouse gas, nitrous oxide.

In 2019, the Dutch Council of State ruled the government’s policy to reduce excess nitrogen breached EU directives on protecting vulnerable habitats and it needed to do more.

Now, regional governments have been given a year to formulate detailed plans, which are also expected to impact traffic and industry.

Projections made by the Dutch environment agency PBL envisaged reducing livestock farming by 30% and critics predict forced farm closures. ‘The honest truth is that not all farmers can continue with their business, and not always in the way that they farm now,’ said the government in June.