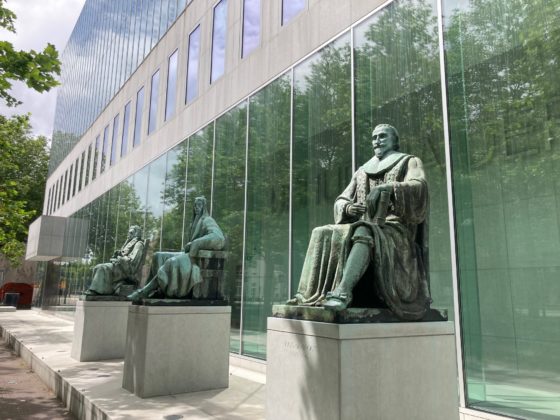 The Supreme Court of the Netherlands in The Hague. Photo: DutchNews.nl

Judges could be given the power to strike out laws that conflict with the constitution under plans being drawn up by the cabinet.

Currently the courts are banned from ruling on whether laws passed by parliament are unconstitutional, but recent episodes such as the childcare benefits scandal have prompted ministers to consider giving citizens more legal protection.

The Netherlands’ highest administrative court, the Council of State, apologised last November to victims of the childcare benefit scandal, some of whom were ordered to repay thousands of euros to the tax office after wrongly being accused of fraud.

The court said judges had taken an ‘all or nothing’ approach to minor infringements of the law for too long and failed to hold government agencies to account on issues such as discrimination.

Traditionally the task of testing whether new laws are constitutionally compliant fell to the Upper House, but the Senate has taken on an increasingly political rule in recent decades.

Home affairs minister Hanke Bruins Slot and legal protection minister Franc Weerwind want to give courts a limited power to rule if a law impinges on people’s personal freedoms, such as the ban on discrimination enshrined in Article 1. It would not cover ‘social rights’ such as the right to housing or opportunities to work.

‘The important thing is that we expand the legal protection for individuals in society,’ Bruins Slot told the Volkskrant. ‘We are creating the option of intervening sooner where it is clear in practice that laws impinge on the constitution.

‘The childcare benefits scandal has shown that the democratic legal system is not something to be taken for granted.’

The reform would itself require a change to the constitution of 1983, which needs two separate votes by both houses of parliament.

It is not the first time politicians have attempted to allow the courts to rule on whether laws are constitutional. In 2004 the then GroenLinks leader Femke Halsema, now mayor of Amsterdam, proposed a reform that was passed once by both houses but then withdrawn.

Last April MPs backed a motion by the CDA’s Anne Kuik, while the four parties in the cabinet included a commitment to review the law in the coalition agreement, but said parliament should debate the issue first.

The latest plan is part of a six-point package of constitutional reforms that also include enshrining the right to a fair trial and creating an electoral college to allow the 1 million Dutch citizens living abroad to vote for the Senate.

Currently the Senate is chosen indirectly by members of newly elected provincial assemblies every four years. Dutch nationals living outside the Netherlands therefore have no say in the composition of the Upper House, even though they have the right to vote in general elections.