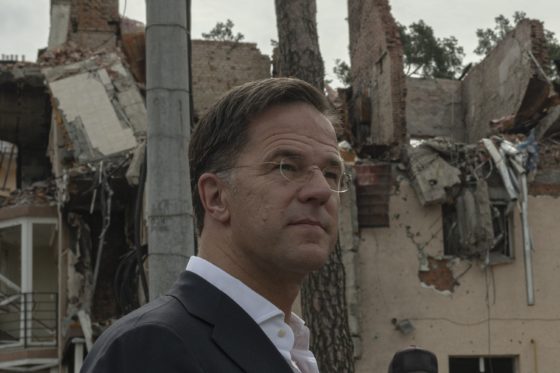 Rutte in Irpin: ‘You see the reason we are supporting Ukraine behind me’. Photo: AP/Andrew Kravchenko

Prime minister Mark Rutte has visited Kyiv for the first time since Russia launched its invasion of Ukraine in February.

In a visit that was kept secret until Monday lunchtime, Rutte began by visiting the suburbs of Bucha and Irpin, where war crimes investigators are collecting evidence of Russian atrocities that left hundreds of civilians dead.

He is due to hold a joint press conference with Ukrainian president Volodymyr Zelenskyy later in the day.

‘Obviously we’ve all seen the photos, but to stand here…’ Rutte said after visiting a bombed-out apartment block in the company of local community leaders.

‘The total opposite of civilisation and decency. That one country has invaded another country and inflicted this kind of extreme chaos. So many people have died, it’s utterly dreadful.’

The Netherlands has given €172.7 million in military aid to Ukraine, including eight German-built P2000 howitzers. Rutte said the support would ‘not stop’ but the Dutch military would need to replenish its own stocks at some point.

He said he was looking forward to meeting Zelenskyy for the first time in person since the war began.

‘Zelensky and I talk on the phone regularly, but I wanted to be here for myself so we could have more time. But also so I could see it for myself and to tell the Netherlands that there is a reason why we are helping Ukraine.

‘There’s also a reason why we in the Netherlands are prepared to accept the consequences together – rising prices, higher energy costs – and you can see that reason behind me.’