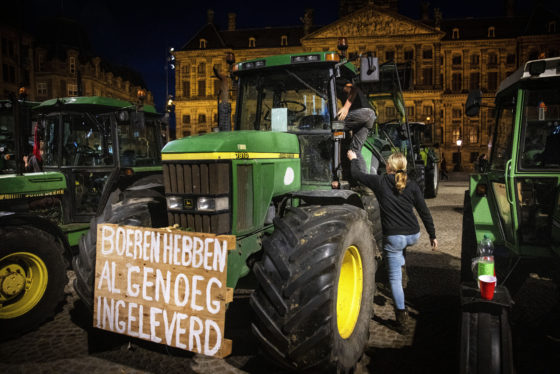 Police have arrested 19 protesters who refused to leave a distribution centre near Rotterdam which has been blockaded by farmers for the past three days.

A spokesman for Rotterdam police told NOS the demonstrators were arrested at 5am on Thursday after they ignored orders to leave the warehouse, used by Aldi, Jumbo and Hoogvliet.

Nine of those detained were under the age of 18, AD reported. They are expected to be released later today. Police also removed 12 tractors from the scene but said they had not been confiscated and their owners could collect them later.

Earlier on Wednesday farmers from Bleiswijk set hay bales on fire beside the A12 motorway in Zoetermeer to protest against the detention of a 16-year-old boy whose tractor was shot at during a police blockade on the A32 motorway near Heerenveen.

Activists from Farmers Defence Force drove in a convoy of tractors to Leeuwarden police station to demand the release of the boy, named in local media as as Jouke from Akkrum.

He and two men, aged 34 and 46, were arrested on suspicion of attempted murder after police claimed they ‘tried to drive at officers and police vehicles,’ but they were released later on Wednesday after the accusation was withdrawn.

The prosecution service said in a statement: ‘There are no grounds for the continued detention of the suspects on suspicion of attempted murder … The three men remain suspects. The public prosecutor has not yet decided if they will be charged.’

Farmers also held demonstrations on Dam Square in Amsterdam, outside Gelderland’s provincial assembly building in Arnhem and at the Mediapark campus in Hilversum as they continued their protests against the government’s plans to reduce nitrogen compound emissions.

She has said some farmers will inevitably have to give up their business, either voluntarily or through compulsory purchase, in order to comply with a ruling by the Council of State that the Netherlands was breaching European nature conservation laws.

Police have placed barriers and concrete blocks on four access roads to Van der Wal’s private home near Hardewijk, which has been the scene of angry protests by farmers in recent weeks. Security cameras have also been put up around the neighbouring village and police have been stopping and questioning people walking in the area.