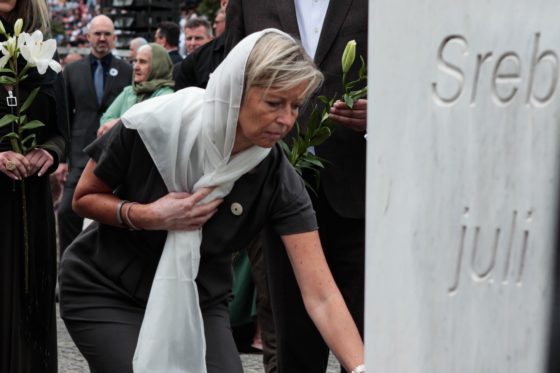 The Netherlands has formally apologised to relatives of victims of the Srebrenica massacre, 27 years after some 8,000 Muslim men and boys were murdered by Bosnian forces in a UN enclave guarded by Dutch troops.

Defence minister Kajsa Ollongren delivered the apology at a memorial service to mark the anniversary of the massacre at Potočari cemetery in Bosnia-Herzegovina.

‘The international community failed to protect the people of Srebrenica,’ she said. ‘As part of that community the Dutch government shared political responsibility for the situation in which this failure could occur. For that we offer our deepest apologies.

‘We cannot take your pain away, but what we can do is look history straight in the eye.’

Fifty victims of the massacre, some of them children, were reburied during the ceremony after they were recently identified. Thousands of people were in attendance in the small Bosnian village.

Last month prime minister Mark Rutte apologised to the Dutch soldiers who were put in charge of the enclave by the UN in 1995, after an investigation found they were unfairly blamed for the atrocity that took place on their watch.

Rutte told veterans of the Dutchbat III battalion that the government acknowledged its own failures of preparation and leadership, as well as the lack of support for veterans when they returned from the war.

Ollongren echoed Rutte’s words as she spoke of the ‘great powerlessness’ of the under-equipped UN troops, while acknowledging the ‘deep anxiety and uncertainty of people who desperately sought protection here’.

She said: ‘Thankfully a number of the chief suspects have since been convicted by the Yugoslavia tribunal in The Hague.’