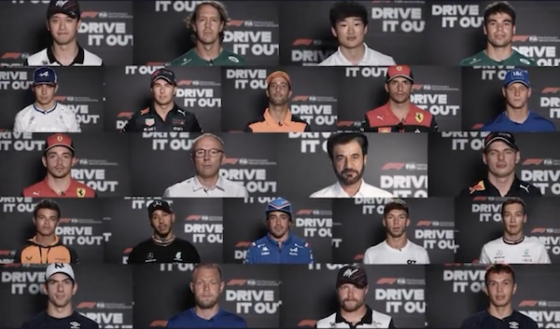 Formula 1 racing drivers, including Dutch championship leader Max Verstappen, have issued a video statement calling on fans to drive abuse out of the sport.

All the drivers, plus F1 boss Stefano Domenicali and FIA chairman Mohammed Ben Sulayem took part in the video, which comes after crowd trouble at the Austrian Grand Prix three weeks ago.

‘If you cannot be respectful, don’t be part of our sport,’ the script states. ‘We cannot let those who think they can abuse others to get away with it,’ said British driver Lewis Hamilton, who has been on the receiving end of much of the abuse.

‘We are united, and ask you to join us in driving this out,’ said Verstappen in his segment.

We are united in our desire to drive abuse of all kinds out of the sport we love, and we’re calling on the entire F1 family to join us.#DriveItOut. Together pic.twitter.com/5MGQ4mCxnb

Dutch fans were blamed for a number of incidents in Austria, and they were condemned by both Verstappen and the Red Bull team as well as the F-1 organisers at the time.

An estimated 50,000 were at the race, but were criticized for cheering after Mercedes duo Lewis Hamilton and George Russell crashed in qualifying. Posts on social media also complained of sexist, racist and homophobic slurs by the Dutch fans.

‘These things shouldn’t happen. I read a few shocking things, so that’s clearly not OK,’ Verstappen said. ‘A normal human being should think like that and should behave like that.’