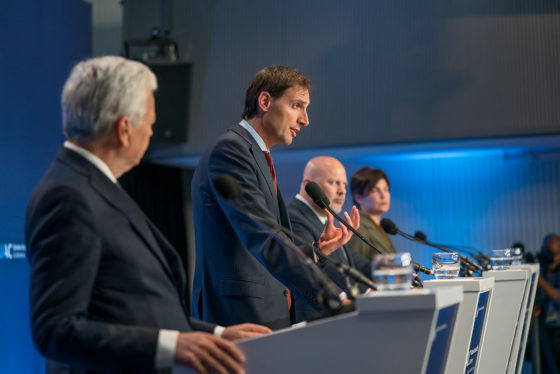 The Dutch Ministry for Foreign Affairs is open to the idea of an international tribunal for war crimes in Ukraine, foreign affairs minister Wopke Hoekstra said following a conference on accountability in The Hague on Thursday.

The International Criminal Court (ICC), also based in The Hague, has opened an investigation into the war in Ukraine, but the court is limited in what it can prosecute. The crime of aggression – the literal invasion of another country – is off the table because of a 2010 agreement that prevents the court from investigating the crime against non-member states. Russia has never signed the 2002 Rome Statute, which created the court.

Hoekstra said the ICC should still be the first port of call for investigating war crimes and crimes against humanity, over which the ICC does have jurisdiction.

‘We’ve established a permanent international court that can hold individuals accountable. In our fight against impunity, we have all the tools we need at hand,’ he said.

The conference in The Hague was organised to discuss accountability for the international crimes committed in Ukraine. Attendees included Ukrainian president Volodymyr Zelenskyy, the prosecutor of the ICC, Karim Khan, and Attorney General of Ukraine, Iryna Venediktova.

At the conference, the Netherlands pledged to contribute an additional €3 million to the cause. €1 million will go to the ICC, €1 million will go to support the UN Human Rights field office in Ukraine and the remainder will be earmarked for psychosocial support for victims of sexual violence.

The Netherlands has already sent more than a dozen investigators to collect evidence and document crimes as part of an ICC investigation team.

Legal experts have floated various other avenues, including allowing Ukraine to prosecute Russian perpetrators themselves. Kyiv has already held trials for several lower-level Russian soldiers who have been captured on its territory.