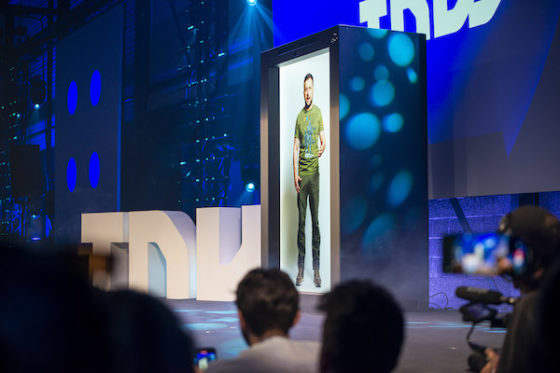 Ukraine’s president Volodymyr Zelenskyy addressed The Next Web conference in Zaandam via augmented reality on Thursday, announcing a programme of ‘digital lend-lease’ in which Ukraine could be used to develop new technologies in return for financial and technological support.

In his address, Zelenskyy outlined ways in which technology is changing public life, from cloud information storage, online learning and medicine, to using artificial intelligence in the judiciary.

He also painted a vision of Ukraine as a fully digital democracy, where technologies would allow for the ‘total stability of all state institutions and the banking system’.

The digital lend-lease programme will be further discussed during the Ukraine Recovery Conference in Lugano, Switzerland on 4–5 July. The concept dates back to the World War II as lend-lease, which allowed the US to lease or lend military hardware to the the allies in Europe.

Julia Petryk, a TNW attendee and a Ukrainian employed in tech, welcomed the speech.

‘I was surprised that Ukraine was not more on the [TNW] agenda,’ she said. ‘So it was unexpected and a great surprise that Zelenskyy was on the main stage. It was so good to see him as a key presenter and highlight.’

‘Perhaps it’s unusual for presidents or heads of government to use a hologram to address people but this is not the only aspect of Star Wars that we are putting into practice,’ Zelenskyy said. ‘We will defeat the empire, too.’