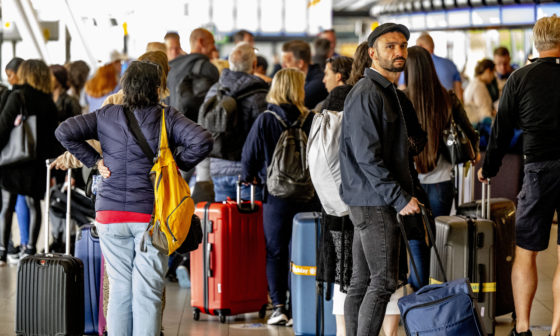 Air passengers have been warned to face delays and long queues this summer despite Schiphol airport reaching an outline agreement this week with unions to improve pay and conditions – which will add up to €840 to salaries in the holiday period.

A walkout by baggage handlers in April caused massive disruption on one of the busiest Saturdays of the year, the start of the May school holiday, while a shortage of security staff has led to long waits at baggage checkpoints in recent weeks.

The deal between the airport’s management and the FNV union is designed to prevent further strikes but underlying problems remain, including understaffing and scheduled maintenance work on two runways at the start of July.

A document leaked to the Telegraaf warned that the trend was likely to continue through the summer, peaking in July, with Fridays and Sundays expected to be the busiest days.

Roel Elshout, director of claims firm Vlucht-vertraagd.nl, said a million passengers could be affected by measures to relieve the pressure on the airport.

Schiphol has struggled to cope with demand in recent weeks despite operating at 70% of its maximum capacity.

Airlines are being asked to cancel flights or switch them to regional airports such as Rotterdam or Eindhoven as Schiphol seeks to cut its timetable by 30% in July and August.

But most carriers want the airport to make changes first, such as opening the terminal earlier to allow passengers to queue, before they change their schedules.

‘It’s like a wild west duel where everyone is looking at each other to see who moves first, while hundreds of thousands of holidays are at risk of falling through,’ Elshout told the Telegraaf.

Schiphol’s CEO Dick Benschop promised at the weekend that the airport had an action plan to prevent a repeat of last month’s chaos in the summer, but on Monday he tempered expectations by warning that staff shortages would not be fixed quickly.

Benschop and FNV negotiator Joost van Doesburg said the deal, which includes extra bonus pay for airport workers and measures to improve working conditions, had minimised the risk of strikes during the summer, but warned that issues such as a shortage of personnel would not be solved overnight.

The agreement, unveiled at a press conference at Schiphol on Wednesday, includes a €5.25 per hour supplement for some 15,000 workers over the summer period, adding €840 to a full-time salary.

The deal, which will cost the airport up to €50 million, will apply to security staff, cleaning crew, check-in and baggage handling and other service staff. The bonus will also be paid to staff who worked during the recent May holidays.

‘I don’t think the queues will be gone by summer, but I think we can make sure we don’t have people fainting in the queues next May,’ Van Doesburg said in a briefing to parliament on Tuesday.

Benschop said the agreement was an ‘important step’ towards tackling the problems and marked a shift in priorities for the airport, which was criticised by MPs for promoting a ‘race to the bottom’ in recent years.

‘For a long time growth and costs came first, but that is no longer the case,’ he said. ‘It’s now about quality and that includes quality of work.’