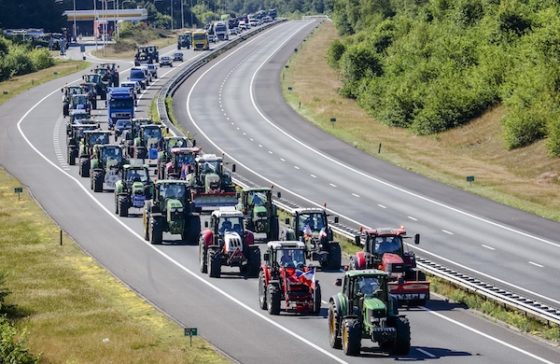 Farmers on the A1 near Apeldoorn after the protest. Photo: Vincent Jannick ANP

A day after farmers caused chaos on the roads by illegally driving their tractors onto motorways ahead of a mass demonstration, police are attempting to identify drivers who defied the law.

Many farmers reportedly hid their number plates, making it difficult to trace them, but police say they will make an extra effort when it comes to dangerous situations on the road.

In addition, the police response to the protest is also being looked at, following complaints that they could have done more to end the traffic problems, broadcaster NOS reported.

Police chief Willem Woelders told television current affairs show Nieuwsuur that he did not have the impression police had failed, adding that agreement had been reached with farmers’ organisations in advance about not using the roads.

‘And then you see a large group who decided between them to hit the motorways anyway,’ he said. ‘We tried to stop them at places where we expected problems and in some places we managed it. But there were so many of them, you cannot be at every slip road.’

Police had few other options to stop the tractors, particularly from a road safety perspective, he said.

He added that police would hold talks with local mayors and ministers to decide if the approach should be different next time. Should the preference be to use the military police, which has a number of armoured vehicles at its disposal, then politicians should take that decision.

In one incident on Wednesday, a tractor and a lorry were involved in a collision on the A12 near Ede. That resulted in three people, all of whom were sitting on the tractor, being taken to hospital.