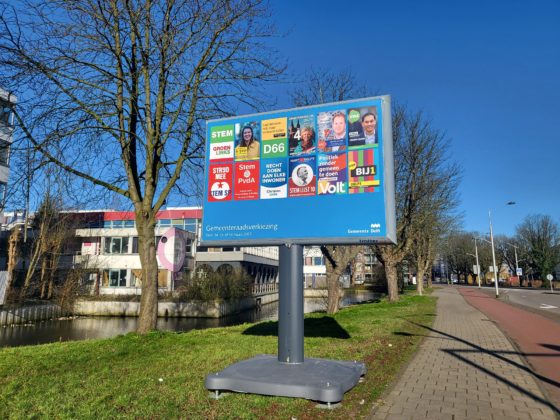 Many of the Netherlands’ biggest local authorities are unwilling to say whether they did enough to reach non-Dutch nationals ahead of the local elections in March, during which turnout plunged to a low of just over 50%.

The home affairs ministry is currently preparing a report on the low turnout which is due to be published later this month, but there will be no specific focus on expats, who accounted for over 10% of potential voters in some areas.

Dutch News contacted 15 local councils with the biggest international populations to ask if they were satisfied with their efforts to reach ‘expat’ voters, following the record low turnout in most places.

Nine of these responded. But Amsterdam, Groningen, Amstelveen, Leiden, Haarlem and Arnhem were unwilling to comment, despite repeated requests.

Of the municipalities that did respond to questions about the elections, none wanted to state whether they were satisfied with their efforts to reach international voters.

‘The question is when you can be pleased with your information efforts. A low turnout does not mean that the information was insufficient,’ said Paul Tissingh from Rotterdam. Just 38.9% of voters turned out in Rotterdam, the lowest level in the country.

‘We do not distinguish between target audiences, unless the council asks us to. For example, all young first-time voters were sent extra information. This was an explicit wish by the council,’ said Utrecht spokesman Marten Grupstra. Turnout in Utrecht was 56.4% compared to 59% in 2018. It did not publish any specific information aimed at international voters.

In Amsterdam, the council has now commissioned research to try to find out why so few people voted, and will focus on several groups, including first-time voters and international workers. Around 100,000 foreign nationals were eligible to vote in the capital and overall turnout was 46%, down from 52.2% four years ago.

In the run-up to the elections, Dutch News contacted the 10 municipalities with the biggest international populations to find out how they were attempting to contact potential non-Dutch speakers.

Under EU directives, national authorities have to inform EU citizens how to exercise their voting rights. However, most rely on ‘passive information’, such as mentioning voting procedures on their websites.

All provided some information in English, but the approach differed. Utrecht and Leiden left the communication up to third parties, such as local expat centres, civil initiatives and local political parties.

Groningen and Eindhoven went much further, however, actively reaching out to international voters with events and targeted advertisements.

Home affairs minister Hanke Bruins Slot said shortly after the election she was concerned about the low turn-out.

Ministry spokeswoman Pauline van Voorst told Dutch News that the report due out this month will focus on the election process rather than voters’ characteristics.

‘People of different nationalities are often not well-represented in the panels, so it is not possible to draw conclusions about this particular group,’ she said.

The European Commission is working on draft legislation which would require EU countries to designate a national authority to ‘directly and individually communicate’ to EU residents about the conditions under which they can vote, including the status of their registration, how and where to vote, and how to obtain more information about the election.

In addition, the basic information should be provided in at least one other EU official language ‘that is broadly understood by the largest possible number of EU citizens’ in the country.

The Commission aims to have the new rules in place by 2024, in time for the next European elections.