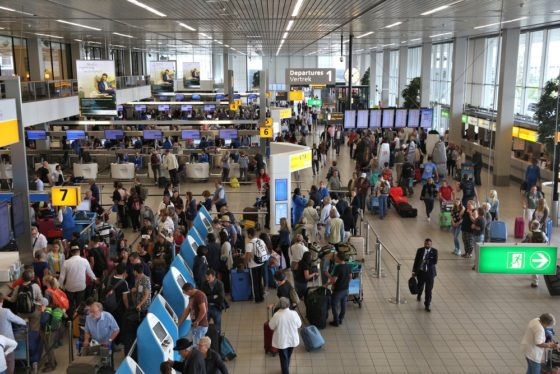 Delays and long queues are likely to be a regular occurrence at Schiphol airport this summer after airlines laid the responsibility for fixing the crisis at the feet of the airport’s management.

Appeals for airlines to help remedy the problem by cancelling or merging flights have largely fallen on deaf ears, though Schiphol’s biggest customer, KLM, has taken steps in recent weeks such as restricting last-minute bookings.

On Saturday the national flag carrier flew 42 empty planes back from European destinations to ease the pressure on transfer desks at Schiphol. KLM said passengers who were left behind would be rebooked onto later flights.

‘In order to ensure that conditions at Schiphol remained safe and operational for passengers and crew, KLM took the impactful decision not to transport any new passengers to Amsterdam,’ the airline said in a statement.

On Saturday a Transavia flight to Crete was cancelled at the last minute because of personnel shortages, after some passengers had already checked in their bags.

Airlines told FD.nl they expected Schiphol to tackle staff shortages and cancelling flights should be a ‘last resort’.

‘They need to recruit new personnel faster than is happening now,’ a KLM spokesman said. ‘Other interventions are needed as well.’

Transavia has cancelled around 2.5% of flights between April and October, but still expects to operate 50 to 55 flights a day in the summer. The airline has also transferred a small number of flights to regional airports such as Rotterdam and Eindhoven, but said this was not possible on a large scale because the airports are too small.

‘Cancellations are undesirable. Schiphol must take responsibility,’ said a spokesman.

Package tour operator Corendon has moved some of its flights to German airports and says it is prepared to cut up to 10% from its summer schedule if necessary. But chairman Marnix Fruitema said the problems were the result of ‘bad policymaking by Schiphol.’

‘They responded far too late to the capacity problems,’ he said.

The Netherlands’ largest tour operator, TUI Fly, said it was not prepared to cancel people’s summer holidays to ease pressure at the airport. ‘In our case these are complete holidays that can only go ahead on the planned days,’ said a spokesman.