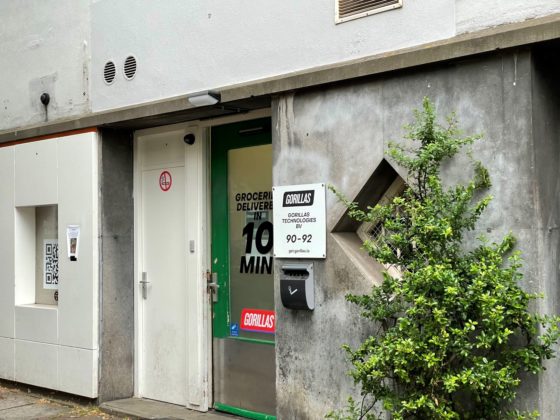 A Gorillas store in De Pijp is fighting an order to close Photo: S Boztas

Super fast delivery firm Gorillas is open to scrapping warehouses in residential-only areas, after complaints about nuisance and a crackdown by Amsterdam council.

But Sadik Cevik, general manager Benelux, told the Micromobility Europe conference on Wednesday that the sector must be treated fairly by local regulators and can be a force for good.

In the same way that many people do not want to live next door to a full-time holiday rental, he said, concern about ‘dark store’ warehouses can be legitimate. ‘It is a valid concern, but the data also shows that [just] 10% of the dark stores are in pure residential areas,’ he said. ‘Ninety percent of the dark stores are in the right areas, and those 10%, yes, we need to maybe remove those and learn from the last couple of years, changing them to new stores that do accommodate the neighbourhood.’

Earlier this year, Amsterdam and Rotterdam voted to freeze new openings of dark stores, which are not open to consumers but used to warehouse goods for city delivery – sometimes 24/7 – in a matter of minutes.

Amsterdam has ordered several stores to close, successfully winning one court challenge, and ruled that from the end of 2023, the city can ban dark stores in residential or mixed-use areas. Dutch media have also raised concerns about the employment status and protections for delivery cyclists, especially in work-related accidents.

The venture capital-funded fast delivery sector, meanwhile, has announced sharp cuts. Getir has announced it will sack around 4,400 employees, 14% of its staff, Zapp is laying off 10% and Gorillas said around 300 people would lose their jobs.

But Cevik has pledged to make his Amsterdam operation profitable within two months, and said that a ‘hub’ model for the last mile of delivery of goods by bicycle is no worse than fast-food delivery.

‘It’s surprising to see that Amsterdam city is behaving this way to mobility in general,’ he said. ‘Every new shiny thing has a lot more attention than other businesses, and people tend to put a new concept under a microscope.

‘I don’t see us as necessarily different from the pizza delivery from Domino’s with ten scooters in front of their [outlet], or a supermarket where we know there’s ten times more traffic. We need to fit the right location, but I don’t see us having different stores than any other of the thousands of businesses in the city of Amsterdam.’

He argued that municipalities need to focus on improving cycling infrastructure too. ‘Entrepreneurs hear that the city of Amsterdam wants fewer cars, more bikes, more smaller vehicles…and now we see there are too many bikers in the street. The question [for] government is how to adapt the city for this new environment.’

The warehouse network, he added, can have positive social functions. ‘What I love most is what innovation is out there afterwards: can we use the down time to do package deliveries or use our hubs in the mornings to deliver medicines for people in need?’ he said. ‘There is so much potential.’