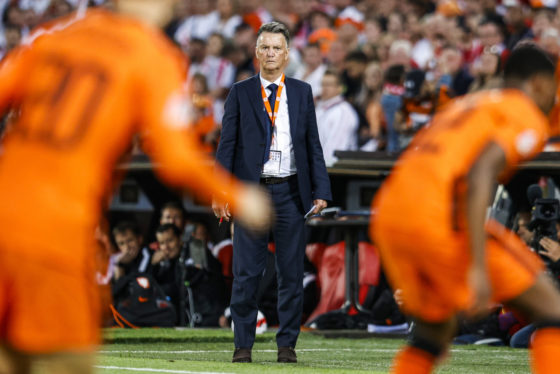 Van Gaal was speaking after Oranje drew 2-2 with Poland in Rotterdam in the Nations League, with Memphis Depay missing a last-minute penalty after the Dutch had come back from 2-0 down.

After the game the coach was typically forthright in his assessment of the stadium, calling it ‘allemaal oude troep‘, or ‘a load of old crap’. Van Gaal said De Kuip’s only asset was the playing surface: ‘This is the best pitch in the Netherlands.’

Earlier this year Feyenoord abandoned plans to move out of De Kuip, which dates from 1937, to a new stadium-cum-housing development beside the Maas because of spiralling costs. The plans had been strongly opposed by the club’s hard-core fans.

‘I had to sit with the technical staff in the gym. They put out a table with a coffee pot. At half-time I did my team talk with my back to 10 or 12 players. That shouldn’t be happening.’

The Dutch team has a strong record in De Kuip, where it has not lost in 29 matches, including a 19-game winning streak that ended with Saturday’s draw.

Van Gaal said he would prefer to play all international matches in the Johan Cruyff Arena in Amsterdam. ‘In the Arena the technical staff have a nice room to themselves. So I’d prefer the Arena, but I’m only the national team coach, so I don’t have anything to say about it.’