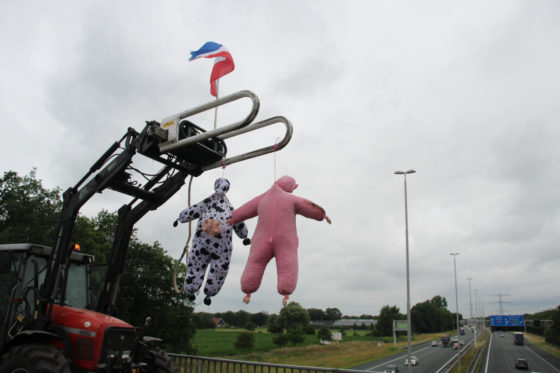 Farmers hang effigies of a pig and a cow above the A1 near Borne. Photo: ANP/HH/GinoPress

New farmers’ protests brought traffic to a standstill on several motorways around the country on Monday, despite police warnings not to break the law.

Around 15 tractors blocked the A2 at Best, in the direction of Den Bosch, by laying hay bales across the carriageway. Similar blockades were set up on the A67 at Liessel, between Eindhoven and Venlo, and on the A28 between Hoogeveen and Assen.

Tractors also blocked an access road to the N35 at Ommen, Overijssel. The ANWB said queues of up to 8km had built up at the protest locations.

Protest organisers including Agractie and Farmers Defence Force (FDF) warned motorists to expect disruption on the roads from noon, but denied that they were co-ordinating the action.

Farmers are protesting against the government’s plans to reduce the size of the agricultural sectors to comply with European conservation laws.

A Council of State ruling three years ago has forced the government to come up with wide-ranging measures to cut emissions from nitrogen compounds such as nitrous oxide and ammonia by up to 70% in some areas.

Christianne van der Wal, the minister responsible for tackling the so-called nitrogen crisis, has said some farmers will have to give up their businesses.

Opposition parties such as the Farmer-Citizen Movement (BBB) have queried the scientific basis for the reforms and said other sectors such as construction and aviation should share the burden of cutting emissions.

Police have warned farmers that they risk being fined if they protest by driving tractors on the motorway. ‘It’s fine to exercise your rights, but tractors are banned on the motorway,’ a spokesman said.