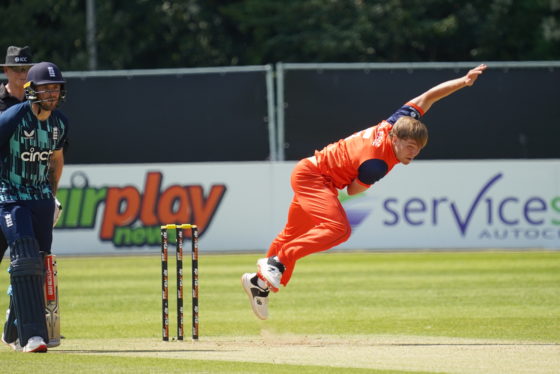 A world-record, three centurions, 6000-odd loud spectators, a 232-run win for England and a cracked glass window courtesy of Max O’Dowd’s six. All in a day’s play in Amstelveen.

England, on their return to One Day Internationals after 11 months, enjoyed an all-round day as they broke the world record to post an imposing 498-4 batting first – the highest score in ODI cricket. In reply, the Netherlands were bowled out for 266 with half-centuries by Max O’Dowd (55) and Scott Edwards ( 72*) the only crumb of comfort for home fans.

The Dutch learnt how harsh the consequences of dropping catches can be after Phil Salt was dropped on 42, allowing him to score 122, his maiden ODI century as Jos Buttler, too, was handed two reprieves on 17 and 37 and later went on to bludgeon an unbeaten 70-ball 162, hitting 14 sixes and seven fours.

Having won the toss and opted to bowl first on a hot day on a flat pitch with short boundaries, the Dutch got off to a perfect start as Shane Snater bowled his cousin and England opener Jason Roy for 1 in his first over.

All 26 sixes from our new world record 🤩

However, Dawid Malan and Phil Salt stitched a mammoth 222-run partnership bringing up their respective maiden centuries in the format. While Salt was more aggressive in his 93-ball assault, hitting 14 boundaries and three sixes regularly peppering the leg-side and straight boundaries, Malan was content playing second fiddle.

In the process, Malan became only the third England cricketer, after Heather Knight and Jos Buttler, to score an International century in all three formats hitting 125. He was also involved in a 184-run stand with Buttler but fell against the run of play, holing out to Bas de Leede off Pieter Seelaar in the 45th over. Seelaar, who took only his second wicket in the last 12 ODIs, dismissed his opposite number Eoin Morgan for a first-ball duck to bag two in two balls.

However, the dismissals did not deter England’s fight in the death overs as Buttler brought up his 150 shortly after registering the second fastest ODI hundred for England and took a particular liking to spinners Seelaar and Aryan Dutt, striking three sixes off each of their overs. Liam Livingstone (66* off 22 balls) took down leg-spinner Philippe Boissevain in the 46th over hitting four sixes and a brace of boundaries to bring up England’s fastest individual fifty off 17 balls.

‘Dropping those catches, you can’t drop the best batsman in the world [Buttler] twice in an over,’ Seelaar surmised after the game. ‘Phil Salt was dropped on 30-40. It wouldn’t have been a completely different game but you wouldn’t have been looking at 498. In terms of that we let ourselves down.’

The Dutch bowlers looked clueless in the face of a six-hitting masterclass and an exhibition of sheer range-hitting power as England clobbered 26 sixes in total and 274 runs in the last 20 overs. It was also only the third instance in the format that an innings featured three centurions.

Tasked with a tall order, Dutch openers Max O’Dowd and Vikramjit Singh looked positive only for the latter to be bowled for 13 in the third over. O’Dowd partnered with Musa Ahmed in an 80-run stand, the highest in the innings, but the duo were dismissed in successive overs by off-spinner Moeen Ali (3-57) and left-arm quick Reece Topley (2-46).

However, O’Dowd brought up his sixth ODI half-century laced with six boundaries and two sixes but failed to capitalise on it. Tom Cooper, de Leede and Seelaar were dismissed in their 20s as wicket-keeper Scott Edwards (72* off 56 balls) raged hard against the dying of the light to bring up his sixth half-century in vain as the Dutch were eventually bowled out for 266 with two balls to spare.

‘It’s great learning. This will make us better cricketers in the future,’ Seelaar reflected. ‘The intimidation factor was there, the Barmy Army was quite loud, and the experience has to count for something but that’s in the long run. Now, we have to grab ourselves together and put up a better performance on Sunday.’

The two sides meet again on Sunday, 19th June at the same venue for the second ODI.