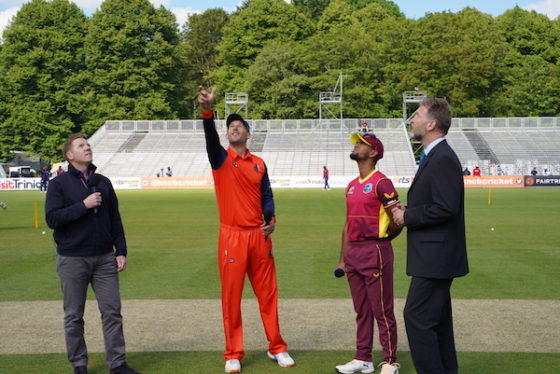 The Netherlands won the toss and elected to bat first. Photo: KNCB.nl

It was a case of so near yet so far for the men from Oranje as West Indies recovered from 99-5 to overhaul a target of 215 to win by five wickets in the second One Day International in Amstelveen.

Man-of-the-match Brandon King, who scored an unbeaten 91, and St. Maarten’s Keacy Carty (43*) held their nerve and stitched a 118-run partnership to help the West Indies take an unassailable 2-0 series lead with one match left to play.

Earlier in the day, Pieter Seelaar won the toss and elected to bat first under sunny, blue skies. The Dutch opted to play a spin-heavy attack on a dry pitch with the inclusion of 19-year-old leg spinner, Shariz Ahmed, who was handed his cap by elder brother and teammate Musa Nadeem Ahmed, in place of Vivian Kingma.

Once again, openers Vikram Singh and Max O’Dowd made hay under the sun as they put up a 101-run stand for the first wicket. Singh, who made an aggressive 46 off 58, was the first to fall, chipping a return catch to leg-spinner Hayden Walsh as O’Dowd soon followed after registering a 78-ball half-century, his fourth in ODI cricket.

It was downhill from then onwards as the middle order failed to capitalise on a strong start as the Dutch managed to hit only one boundary after the 20th over until they were bowled out for 214 in the 49th over. Wicketkeeper-batter Scott Edwards top scored with 68 and batted proactively to bring up his fifth ODI fifty but found little support at the other end.

For the visitors, left-arm spinner Akeal Hosein continued his good form, having picked 2/29 in the first ODI to bag his career-best figures of 4/39 accounting for O’Dowd, Bas de Leede, both bowled, Teja Nidamanuru, caught and bowled, and skipper Seelaar, caught at deep square leg.

In response, the West Indies got off to a contrasting start to the Dutch openers losing the centurion from the last match, Shai Hope, and Shamarh Brooks inside the powerplay as Logan van Beek (1-39) and Bas de Leede (2-46) were rewarded for bowling tight lines. They slid further to 60-4 in the 16th over as Nicholas Pooran was once again bowled by off-spinner Aryan Dutt.

Shariz Ahmed struck off his second ball to dismiss Kyle Mayers, edging a googly to the keeper, to reduce the West Indies to 99-5 and put the Netherlands in the driver’s seat. However, Brandon King, whose knock of 91 featured nine boundaries and three sixes, and Keacy Carty batted patiently to ensure there were no more hiccups to seal the chase with 27 balls to spare.

‘Obviously, we didn’t score enough with the bat,’ Seelaar said after the game. ‘We had a very good platform. Having them 99-5, we let it slip and did not apply enough pressure.’

‘To be honest, we dropped off too quickly to be competitive. You can say nice things but ultimately we want to win. I’m standing with disappointment but there’s also a lot of pride in me. Lots of positives but it wasn’t good enough. To win games, you can’t be good in patches, you have to be good for 100 overs. That’s something we need to work on.’

The two sides meet for the final ODI on Saturday as the West Indies aim for a clean sweep and the Dutch a consolation win.