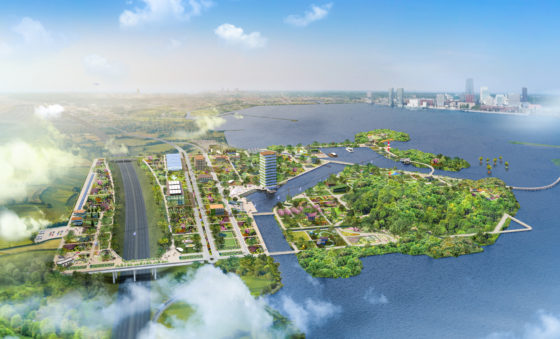 An aerial impression of the Floriade  Image: Floriade

The entire executive board of Almere has resigned over the failure of the 2022 Floriade exhibition to attract enough visitors to pay its costs.

In an emotional speech on Thursday, head of finances Julius Lindenbergh said that the city would need to inject another €33.8 million into the festival, which has already reportedly cost €41.5 million.

He said that he felt ‘powerless’ at the extra costs, which according to Omroep Flevoland, were almost twice a reserve of €17 million allocated by the city in case pandemic ticket sales were insufficient. In a news release, the city said that although just over 232,000 people visited the horticultural attraction since the April 13 opening, this was ‘hugely less’ than expected – in fact, a third of projections.

The total expected visitor numbers were revised downwards, from two million to 1.2 million or even, in the worst case, 800,000.

‘As a city, you are dealing with huge forces, partly national and partly international, influences to which you are completely exposed when you organise this kind of event – and they all seem to be working against us,’ said Lindenbergh. ‘I feel this is just terrible for the people of the city…thinking about all of the cuts we have had to make as a result of these costs today.

‘What a message this is to send to people who are having a tough time with inflation at the moment, who cannot pay their energy bills. This touches me to the core.’

The city administration informed the elected council earlier this week that the Floriade Almere 2022 BV company was in danger of going bust. Research by the Motivaction organisation on the expo, which has a sustainable future cities theme, suggested that while it really appealed to almost half of visitors, others were put off by an entry price of €29 a ticket and many were simply going out less due to the coronavirus pandemic and higher costs at home.

According to the research, ‘day trip locations are being visited less often than before corona… and social events have a higher priority than day trips, while people are more likely to choose a well-known attraction.’

Local press reviews for the Floriade have been lukewarm, after years of debate about whether the event should have been postponed, especially due to the impact of the coronavirus pandemic on local and international participants.

Some recent online visitor reviews have said it was ‘disappointing’, while others described it as ‘a nice day out’. There have, however, been more positive profiles in international media such as the BBC, French Le Figaro and Germany’s Heessische Allgemeine.

On Thursday night, after the bad news was revealed, the entire council executive board resigned due to the ‘huge disappointment and financial drama’. In a letter, they said: ‘The Floriade is looking beautiful. The greenery is stunning and all pavilions are complete. The Floriade deserves to be visited by as many people as possible, and the city deserves this too.’

But more than expressing disappointment, they said that they felt obliged to take responsibility and resign.

Coronavirus infections have risen in recent weeks, while international visitors to the Netherlands as a whole are still expected to be only 50% to 90% more than 2021, and at best around 12 million. The Keukenhof flower gardens reported 1.1 million visitors from more than 100 countries this year, around a quarter down on the record year of 2019.

The Floriade – which happens in a different city every 10 years – is due to run until October 9.