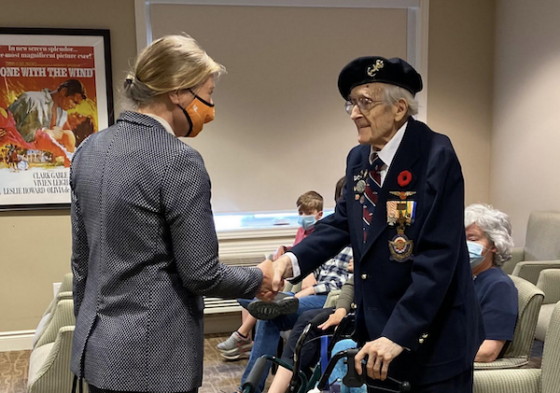 A 102-year-old Dutch World War II veteran has been given back his Dutch nationality, nearly 70 years after he gave it up to work in New Zealand because of the lack of jobs back home.

André Hissink had to hand back his Dutch passport in 1953 because of strict laws in the Netherlands on dual nationality and says he has ‘held a grudge’ about it since then.

Hissink, who now lives in Canada, is the last survivor of the 320 Dutch Squadron which was made up of Dutchmen who fled from the Netherlands to England and joined the British Royal Air Force.

He was given official confirmation of his Dutch nationality by the Dutch ambassador to Canada last week.

‘To me it feels as if a wrong has been righted,’ Hissink told broadcaster NOS by phone. He said he had never wanted to give up his Dutch nationality but had had no choice at the time. ‘I was so angry about it,’ he said.

Hissink, who spent the rest of his career working in the civil aviation industry, launched his campaign to get back his Dutch nationality after being encouraged to do so by his family.

The exemption to the government’s dual nationality rules was ‘tailor-made’ for Hissink and personally signed off on by king Willem-Alexander, ambassador Ines Coppoolse told him during the ceremony in Perth, Canada, where he now lives.

Mr. Hissink’s life story is featured in the book starting with his time in Rotterdam during #WWl. After the Nazis bombed Rotterdam, he escaped to England. (1/2) pic.twitter.com/NutxC2XLIu

‘You are Dutch and you will be Dutch again,’ the ambassador is quoted as saying by CTV News. ‘You have always been Dutch at heart and so I would be the last person to tell you what it is to be Dutch, because I should probably take lessons from you instead of the other way around.’

The Netherlands has very strict rules on dual nationality which date back to 1892 and require Dutch nationals to give up their passports if they become citizens of another country.  Foreign nationals have to renounce their original nationality to become Dutch.

The previous government had pledged to bring in reforms to take changes in migration into account, but failed to do so. The current administration has made no commitments to change the rules.