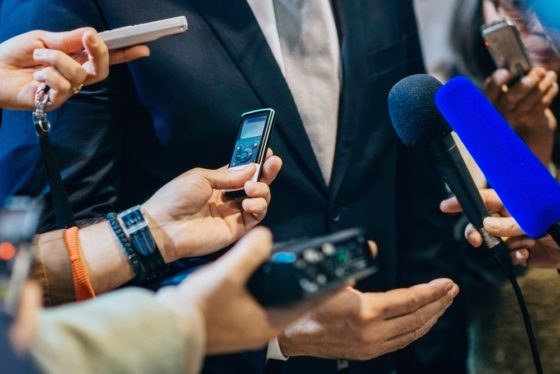 The Netherlands has tumbled to 28th place in the annual press freedom index compiled by Reporters Without Borders, following changes in the ranking methodology which give greater weight to safety.

The list is headed by Norway, Denmark and Sweden with Belgium, France, Germany and Britain all appearing higher up the index than the Netherlands.

Last year the Netherlands was in sixth place but has now gone down to 28th because more weight is now being given to the risks facing journalists as they do their jobs.

‘Polarisation of public opinion regarding Covid restrictions and immigration has led to an increase in verbal and physical aggression against journalists, especially photo and camera crews,’ the report said.

‘A consequence has sometimes been self-censorship and reluctance to tackle certain subjects. Abuse and trolling on social media inhibit news gathering and publication. Female reporters and journalists of colour are especially vulnerable to such attacks.’

The murder of crime reporter Peter R de Vries in July 2021 is the most high profile attack on journalists within the past year, but there have been a number of other instances.

In Groningen, a fire bomb was delivered to a journalist’s home and during the coronavirus protests, several were attacked or driven at by cars. Broadcaster NOS has removed its logo from outside broadcast trucks because of the risk of attacks.