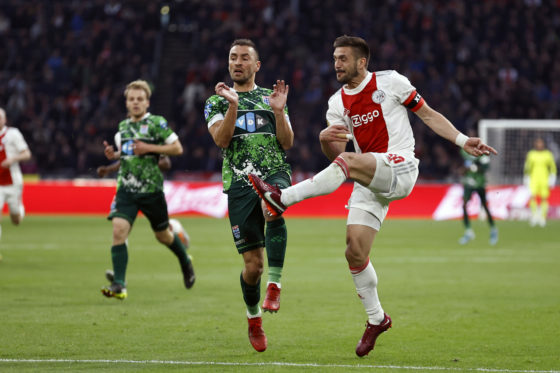 A routine win over struggling PEC Zwolle leaves Ajax needing to win two of their last three matches of the season to claim their 36th Eredivisie title.

Captain Dusan Tadic set the Amsterdammers on their way with a sublime half-volley in the 31st minute, while Davy Klaassen struck twice in the second half to wrap up a 3-0 win.

PSV Eindhoven kept the title race alive by beating another relegation contender, Willem II, 4-2 in an eventful Brabant derby. Ritsu Doan opened the scoring inside 80 seconds, with Cody Gakpo and Eran Zahavi also getting on the scoresheet in the first half.

PSV’s fourth goal was a calamity for Willem II defender Wessel Dammers, who steered a long pass into his own net.

Defeats for their rivals allowed Sparta to move off the bottom of the table with a 1-1 draw against AZ in Maurice Steijn’s first match in charge of the Rotterdam club.

RKC Waalwijk were the only team below seventh place to record a win as they moved up to 14th by beating Groningen. Finn Stokkers twice punished some slack defending by Groningen before Richard van der Venne’s well-judged lob put the Brabanders 3-0 up before half-time.

Fortuna Sittard remain just two points clear of the drop zone after two goals by Lutsharel Geertruida set Feyenoord on their way to a 3-1 win in Limburg. The Rotterdammers could even afford the luxury of a missed penalty by top scorer Guus Til.

A topsy-turvy Frisian derby between Heerenveen and Cambuur ended all square. Cambuur twice went behind and looked to have snatched victory when Mitchel Paulissen scored in the 94th minute.

But there was still time for Joost van Aken, who gave away the penalty for Cambuur’s second goal, to poke home an equaliser six minutes into injury time.

Heracles and Twente drew a hard-fought Twente derby which saw the home side go down to 10 men after just 16 minutes when Anas Ouahim was sent off for a heavy foul. Heracles then took the lead through Noah Fadiga before Gijs Smal’s free-kick crept around the wall for the equaliser just before half-time.

Vitesse Arnhem sealed their place in the European play-offs as they beat Go Ahead Eagles 2-1 in Deventer, while Utrecht bagged their first win since the departure of coach René Hake in March as Anastasios Douvikas bundled in the only goal against NEC Nijmegen.