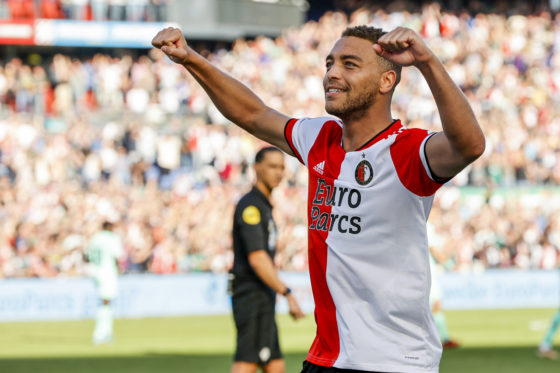 Two late goals for Feyenoord against PSV boosted Ajax’s chances of winning a 36th Eredivisie title, after the champions themselves narrowly escaped defeat in Alkmaar.

Brian Brobbey’s well-judged lob gave Ajax a half-time lead, but AZ turned the game around with goals from Vangelis Pavlidis and Håkon Evjen before Edson Alvarez headed in from a corner with four minutes left.

That gave PSV, who kicked off later, the chance to close the gap at the top to two points with two matches left, and they looked on course to take it with two smart finishes from Cody Gakpo in the first half.

But four minutes from time Cyriel Dessers headed in for Feyenoord and the Belgian completed the comeback from the penalty spot in the sixth minute of injury time, after Mauro Junior was adjudged to have handled in the area.

PSV’s coach Roger Schmidt put the blame for the defeat squarely on referee Serdar Güzübüyük’s decision to award the spot-kick on the advice of the VAR panel and refused to answer further questions, while captain Gakpo queried why the referee had not checked the replay on such a crucial decision.

‘I think he should have done that if the VAR told him it was a possible penalty,’ Gakpo said. ‘We knew that Ajax had drawn and we needed to win here to keep up the pressure. At this stage of the season, when there’s so much at stake, I think he should have gone and assessed the situation for himself.’

Ajax can clinch the title on Wednesday night by beating Heerenveen in Amsterdam, while PSV must now win at home against NEC to stay in contention if the champions slip up.

In the relegation battle, wins for Fortuna Sittard, Sparta and Willem II left PEC Zwolle two points adrift at the bottom of the table, as they could only manage a 1-1 draw at home to Utrecht.

Sparta claimed all three points in Groningen thanks to goals from Arno Verscheuren and Lennart Thy, the latter squeezing in a shot through goalkeeper Peter Leeuwenburgh’s legs to give the visitors a 2-0 lead.

Groningen’s defeat allowed northern rivals Heerenveen to move into the final European play-off spot as Amir Sarr struck twice in the second half to complete a comeback win at Vitesse.

NEC stayed in the hunt as substitute Ibrahim Cissoko popped up with a 92nd-minute winner against Go Ahead Eagles to keep his side level on points with Heerenveen.

RKC are now just three points above the drop zone after they conceded a late equaliser to Cambuur, who all but secured their place in next year’s Eredivisie.