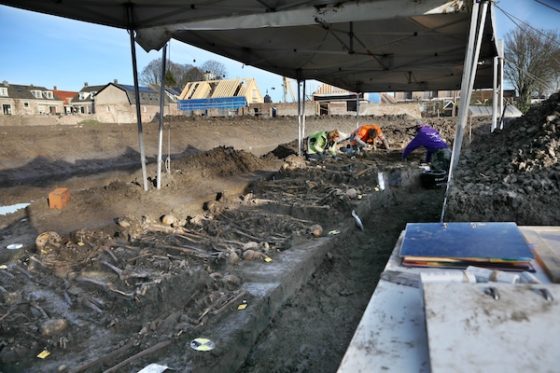 During the excavation in 2020. Photo: Stijn Rademaker ANP / HH

Many of the 82 skeletons found in a mass grave during work in the town of Vianen near Utrecht were English soldiers who died from a bacterial infection in the late 18th century, archaeologists say.

The remains were found in November 2020 and have been examined by forensic anthropologists, who concluded that all but four were men and many came from southern England.

The remains were found outside the city’s old wall in November 2020 during work on the town’s main canal and then researched by forensic anthropologists.

Most were teenagers or young adults.‘At first we thought these man died of injuries in battle,’ researcher April Pijpelink told the BBC. ‘But during my research it became clear that around 85% of them suffered from one or more infections, while basically all their trauma wounds had healed.’

Archaeologist Hans Veenstra told RTV Utrecht he thinks the soldiers ended up in Vianen by chance, because a field hospital is known to have stood at the same location. They were probably part of coalition forces fighting the French during the Revolutionary Wars of 1793–1795.

‘History is full of writing about the elite, people with power, money and status,’ he said. ‘But you don’t often hear about the ordinary man. These youngsters are still anonymous, but they do fill a gap in a forgotten piece of history.’