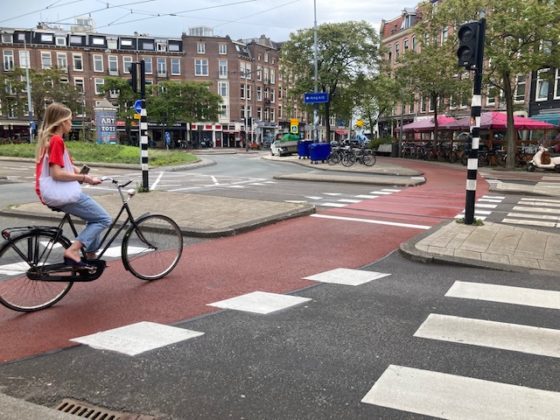 Roundabouts are increasingly unsafe for cyclists to navigate because traffic has become ‘more complex’, research by traffic bureau VIA has shown.

VIA looked at all registered accidents at intersections involving cyclists between 2014 and 2021 and found that roundabouts in particular are much less safe than earlier data had suggested.

Roundabouts make up only 0.6% of the 575,000 intersections in the Netherlands but some 12% of all accidents involving bikes or e-bikes happen on one.

‘Traffic has changed enormously in the past few years,’ VIA traffic safety expert Erik Donkers of VIA told the Parool. There are many more cyclists and the variety in bikes, from normal bikes to e-bikes, means they travel at different speeds. The design of roundabouts has become more complex as well, which makes it more difficult for motorists to spot cyclists in time, Donkers said.

Donkers said the solution to the problem is to reverse the priority rule on roundabouts which now favours cyclists. ‘Giving priority to cars will appeal to cyclists’ own responsibility and prevent a false sense of security,’ he said.

Cyclists’ union Fietsersbond said traffic rules for roundabouts, which vary from local council to local council, should  also be brought into line. ‘In some local councils cars have priority and in others it’s cyclists. That is confusing.’

VVD MP and traffic spokesman Daniël Koerhuis said in a reaction that the number of accidents on roundabouts was much higher than he had thought. Koerhuis said he would be presenting parliamentary questions about the subject to infrastructure minister Mark Harbers on Tuesday.