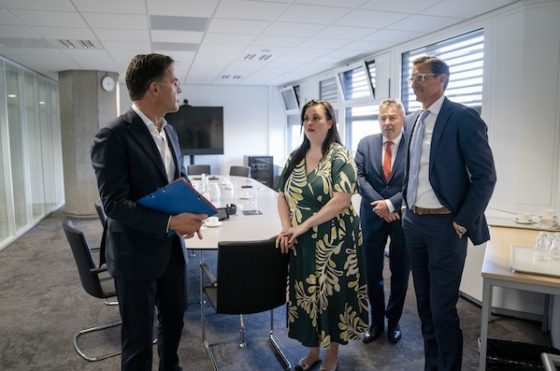 Prime minister Mark Rutte and finance minister Sigrid Kaag on Wednesday completed their first round of informal talks with all the opposition parties, looking for support for their spring mini budget.

The cabinet needs the backing of the opposition to get more controversial measures through the senate, where it only controls 32 seats, six short of a majority.

Rutte and Kaag had presented their tour of opposition parties as a ‘tangible expression’ of the new open government culture yet ‘the cynicism and in some cases, pragmatism’ dripped from the walls, the Volkskrant said in its analysis of the day’s events.

Rutte told reporters several times that talks in the various party offices had been ‘good’.

However, GroenLinks and the PvdA, who are working together in an effort to force through more measures to restore spending power, say they have yet to see a willingness to compromise. ‘They were here to get information… this is old school coalition politics,’ GroenLinks leader Jesse Klaver said.

According to the Financieele Dagblad, JA21, the right wing party with seven senators, did see a chink in the government’s armour.

‘JA21 showed itself to be the most optimistic at the end of the conversation with Rutte and Kaag, albeit with considerable demands,’ the FD said. ‘Like the left wing opposition, it wants a higher state pension, but it is adamantly opposed to increasing taxes.’ The party is also pro drilling for Groningen gas and nuclear power.


‘You have to gain influence as an opposition party, otherwise you are merely an observer,’ party leader Derk Jan Eppink told the FD. ‘And that means negotiating wisely.’

The informal talks are aimed at sketching out the cabinet’s plans to shore up an unexpected hole in the government’s finances, and ‘get an impression’ of the opposition’s ideas, Rutte told reporters.

Sources in The Hague suggest the government needs to find between €5 billion and €6 billion for regular spending and a similar amount for incidentals, such as compensation for savers who paid too much tax on their nest eggs.

According to the Volkskrant, the plan, which must be presented to parliament by June 1, is as good as complete, and could be published as early as next week.