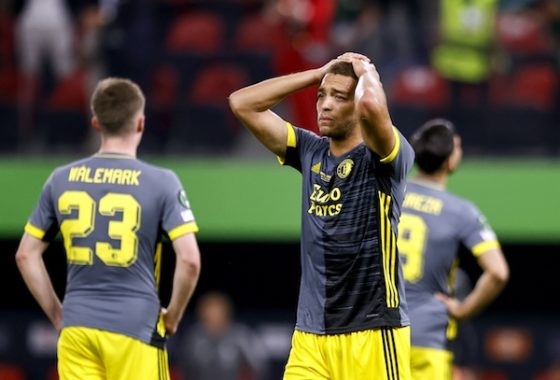 Rotterdam football club Feyenoord lost the first ever final of the Conference League competition to AS Roma 1-0 in Tirana, Albania on Wednesday night.

Feyenoord conceded a goal in the first half and despite a ‘feisty’ fight back in the second were unable to pull one back.

Feyenoord coach Arne Slot said after the match that he had told the team during the break what they had to do better.

‘In the second half, we were sharp from the first moment, but you need a bit of luck and we didn’t get it,’ he told the Uefa website. ‘We had the time and opportunity to score and we didn’t. Maybe that’s to do with the quality of the opponent.’

This has been Feyenoord’s longest-ever season – they played 54 competitive games, which included 19 in the Conference League, including qualifiers. Their previous record was 51 in 2001/02, when they won the Uefa Cup.

Meanwhile, Rotterdam police arrested 72 fans in the centre of the port city after the final when small groups of supporters went on the rampage, throwing fireworks and smashing windows. Order was restored on the Coolsingel, Hofplein and the Weena at around 1am, police said.

Several large screens had been hung around the city for fans to watch the game, including at the Kuip stadium.

In Tirana, Albanian police put s short message on Facebook saying there had been no incidents between the fans, and describing the policing as a ‘success’.

Some 60 supporters were arrested on Tuesday night clashing with police. Of them, 12 were Feyenoord fans.