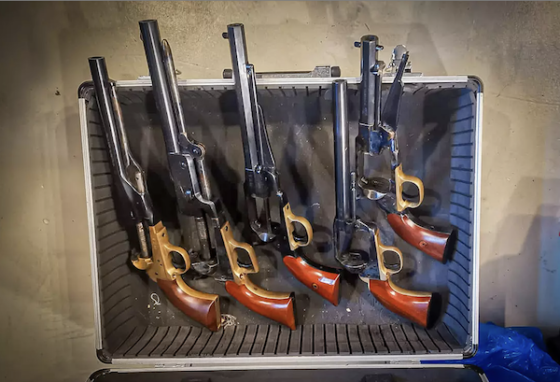 Some of the guns which were seized. Photo: Europol

Police in the Netherlands and Poland have taken down a gang of gun runners who were smuggling arms into Poland using parcel delivery firms.

The arrests were made in late April but the investigation has only now been made public by Europol, which coordinated the case. In total, 82 people have been arrested, all but one in Poland.

Europol said the gang are all Polish nationals and are part of the same family. They have been under investigation since August 2020.

The family members in the Netherlands, who included the gang ringleader, were in charge of acquiring the weapons across Europe. They were then stored in the Netherlands and shipped to Poland as required, where the deactivated weapons were made to work again.

Locations in Beverwijk and Heemskerk were searched at the time the arrests were made, as well as 300 in Poland. Over 250 weapons were seized.

The guns were advertised for sale on Polish online market places as antique or deactivated – which means their sale is authorised. The illegal weapons which could fire were then offered to trusted clients, Europol said.

The gang are thought to have sold several hundred weapons using this method.