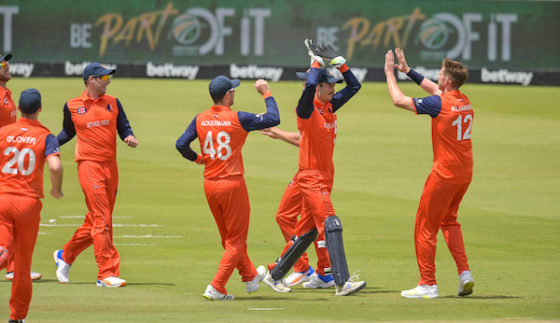 The Dutch national cricket team take on the West Indies in Amstelveen on Tuesday, in the first match of what has been billed as the best Dutch season of cricket ever.

Once the West Indies tour concludes next Saturday, the VRA cricket ground in Amstelveen will host England in mid-June and Pakistan, in August, for three One-Day Internationals each. Both series will be a part of the World Cup Super League.

The young Dutch squad are without regular coach Ryan Campbell who is recovering from a heart attack, but are ready to showcase their intent and brand of cricket against some of the best teams in the world, said captain Pieter Seelaar, ahead of Tuesday’s match.

Ryan Cook has been brought in to replace Campbell temporarily and he says the squad is ‘well balanced and offers depth in batting and bowling options as well as a good blend of experience and youth.’

‘We have managed to spend the past few weeks together as a squad and believe this will provide the cohesion and team unity required to play high quality cricket throughout the series,’ Cook told Dutch News.

Cook’s first assignment against the West Indies will involve a young, inexperienced squad still getting to grips with International cricket against test-playing nations.

Seelaar understands the results may be secondary, pointing to the bigger picture in focus: exposure. The fixture list for the summer underlines invaluable exposure against top-flight, professional test-playing nations, that has often eluded the Netherlands.

‘They’re playing against the best in the world, an opportunity that for associate members doesn’t come along that often,’ Seeler told Dutch News.  ‘We have only played the bigger nations at the few World Cups we have been to.

‘This is the sort of cricket that we’ve been asking for. So, when I say they sometimes don’t realise how special it is, that’s a good thing, because they are not overhauled by the occasion of playing.’

The series, part of the World Cup Super League, the pathway to the 50-over Cricket World Cup to be held in India in 2023, is the first time the West Indies have toured in the Netherlands since 1991.

Crucial 30 Super League points will be up for grabs as the Netherlands look to get off the bottom of the table, having won just two matches out of ten. Meanwhile, their Caribbean counterparts are placed eighth having won just five games out of 15.

The two sides have only met twice, with the West Indies winning by huge margins on both occasions, the last of which came at the 2011 50-over World Cup in India when the West Indians won by 215 runs.

The West Indies, a T20 powerhouse, have won the T20 World Cup twice in 2012 and 2016 but are still in transition with their One-Day set-up, having lost their last two ODI series against India and Ireland. Seelaar is quietly confident the Dutch can stage an upset with the advantage of home conditions.

‘I’m always trying to be quite confident but I definitely see chances and it’s not talking without any disrespect about the West Indies at all because they’re still a quality side but they are not as much of a settled side as they will probably like to be. They have to find their feet quickly with the cold weather around, whereas for us, we know our conditions well,’ he said.

Hopefully, we can capitalise on that and make sure that every opportunity we see, we make it count.’