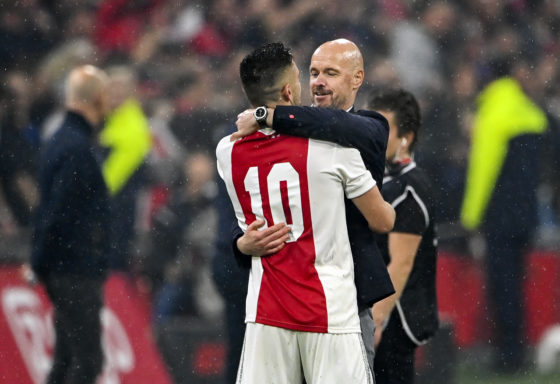 Ajax have wrapped up their 36th Eredivisie title by cantering to a 5-0 home win against Heerenveen.

Nicolás Tagliafico set the ball rolling in the 16th minute with a shot from a narrow angle, before Steven Berghuis headed in Jurriën Timber’s cross to put the home fans in party mood.

Late strikes from Brian Brobbey and Edson Álvarez put the gloss on the scoreline as Erik ten Hag signed off as Ajax head coach in style.

Ten Hag, who claimed his third league title in four seasons, paid tribute to his players’ resilience as they ground out results despite playing below their best towards the tail end of the season.

‘Up until February our play was outstanding,’ he told ESPN. ‘After that we had a lot of problems and changes. The last few weeks were hard going, but I have to praise the squad for their great winning mentality.’

Nearest rivals PSV kept up the pressure as they took a 2-0 half-time lead against NEC in a match that ended 3-2.

At the other end of the table PEC Zwolle were relegated to the Keuken Kampioen Divisie as they went down 2-0 to a resurgent Sparta.

The Rotterdammers, who have been unbeaten since Maurice Steijn took over from Henk Fraser 17 days ago, lifted themselves up to 15th place with first-half goals from Adil Auassar and Vito van Crooij.

Sparta overtook Fortuna Sittard, who lost 2-1 at home to Vitesse, and Willem II, who could only manage a 1-1 draw in Leeuwarden. The Tilburgers need to win their final match at home to Utrecht on Sunday to have any hope of survival.

RKC Waalwijk all but secured their place in next season’s Eredivisie with a 2-0 win over Heracles, who are still not out of danger in 14th.

Twente Enschede secured qualification for the Europa Conference League by beating Groningen 3-0 to guarantee a fourth-placed finish, while Feyenoord wrapped up their season with a win at Go Ahead Eagles.

Groningen and Go Ahead are among six clubs that could still claim the final play-off spot in the battle for the final European ticket, but they will have to hope NEC and Heerenveen, who have a two-point advantage over the others, slip up in their final games.

Utrecht and AZ Alkmaar, who have both already qualified for the play-offs, drew 2-2 in a match that was briefly suspended after objects were thrown onto the pitch towards the end.