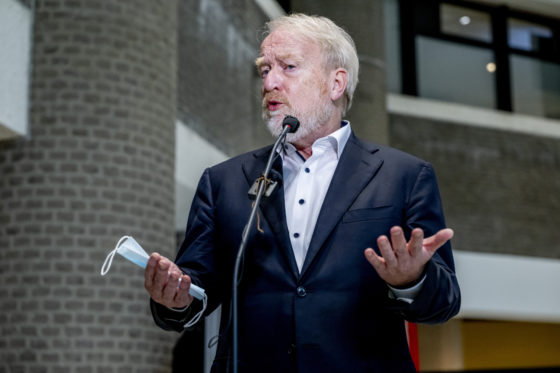 The head of the outbreak management team, Jaap van Dissel, used his private email address to contact colleagues in the OMT and the public health agency RIVM.

As head of the RIVM’s centre for infectious disease control, Van Dissel played a pivotal role in shaping and communicating the Dutch pandemic response. He is the second senior figure in government to admit he sent work-related emails from his private account.

Former health minister Hugo de Jonge was criticised for using private emails earlier this month. The practice is not forbidden but it is strongly discouraged, for security reasons and to avoid creating the impression that government officials may be trying to hide information.

Emails on private accounts are harder to retrieve through information requests, making it harder for parliamentary inquiries and other investigations to obtain a complete record of communications.

Van Dissel confirmed through a spokesman he had contacted colleagues and civil servants from his Gmail account to the Volkskrant. He said he did so for convenience because the RIVM’s systems were less user-friendly and not always accessible.

‘Given the large volume of emails that he received, it makes his work easier,’ the spokesman said.

However, on April 7 2020 the agency sent out a circular email to dozens of staff explicitly warning them not to use private accounts ‘because of the heightened risk of uninvited guests’ – a reference to potential hackers.

‘Be careful with confidential information. Never via private mail, always use the firewall,’ the message said.

The RIVM added that Van Dissel had stopped using his private email for official business in the light of the controversy around De Jonge’s emails. The spokesman also said the two men had not exchanged emails between their private accounts.