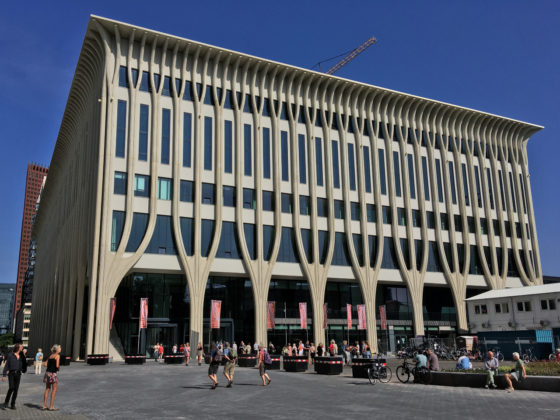 Going down in their estimation: Councillors are concerned about cost implications. Photo: Wikipedia

The Hague’s controversial new cultural centre has received a fresh setback after its architects confirmed parts of the complex are sinking into the ground.

The five buildings of the Amare centre, which opened last September, were built on separate foundations to prevent vibrations from concerts dragging down the whole structure.

However, the concert hall and the Royal Conservatoire music academy’s hall have sunk so far that some doors in the building no longer shut properly, Omroep West reported this week.

Jan Zoet, director of Amare, said the buildings had dropped by ‘several millimetres’ after settling, but the shift was normal for new buildings and ‘within the margins that can be corrected.’

Part of the flooring has been cut away around the doors while architects Cadanz come up with a permanent solution. Zoet said there were ‘no indications’ that the building was in danger of sinking further.

‘We’re not losing sleep over it,’ Zoet said. ‘We were shocked at first, I can’t deny it. But we are confident it will work out fine. This is normal for a new building.’

The city’s culture alderman Anne Mulder said the development was ‘obviously unfortunate’ but a regular issue with a recently finished building. A spokesman for Mulder said there was no threat to public safety.

But Lesley Arp, chair of the Socialist Party (SP) group on the city council, said there were serious concerns that the problems would increase the total cost of the building project, which is already over budget.

‘Jan Zoet is acting as if there’s nothing to worry about, but I’m absolutely not reassured,’ Arp said. ‘We want alderman Anne Mulder, who is responsible for this project, to send the council a letter with information about what the possible risks and consequences of this are.’