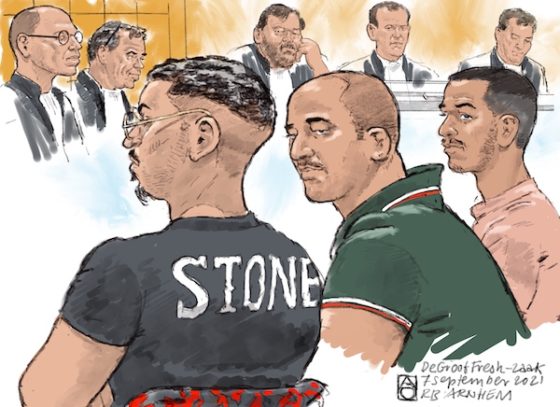 Seven men have been jailed for between 18 months and 10 years for their roles in a string of attacks on people who worked at a fruit importation company in Hedel, near Den Bosch, which unwittingly had become mixed up in a cocaine smuggling operation.

The attacks began in 2019, shortly after workers at the De Groot Fresh Group found 400 kilos of cocaine hidden among a shipment of bananas and handed the drugs over to the police.

Almost immediately afterwards, board members began receiving intimidating text messages, demanding payment of €2.5 million in bitcoin. A mistake by the public prosecution department resulted in a list with the names and addresses of De Groot workers being made public, and then the trouble started in earnest.

In total, 20 separate incidents have been linked to the initial attempt at blackmail, including arson, shootings and firebomb attacks on homes.

Some 25 people have been arrested since the start of the investigation, mainly youngsters in their early 20s who had been recruited to carry out the attacks.

The attacks took place at night at people’s private homes and two were lucky to escape with their lives after their farm burned to the ground. ‘Many families have lived in terror because they could have been the victim of an attack at any moment,’ the court said in its ruling.

The entire Bommelerwaard area lived in fear for several years, and this was an additional reason for the severity of the sentences, the court said.

The public prosecution department says the man who commissioned the attacks is 37-year-old Ali G, who will appear in court in June.

The group sentenced to jail on Thursday were responsible for attacks between October and December 2020 and includes G’s half brother.

Two other groups of suspects are also currently on trial. They are said to have carried out the attacks in May and June last year, when several houses in Bommelerwaard were shot at.