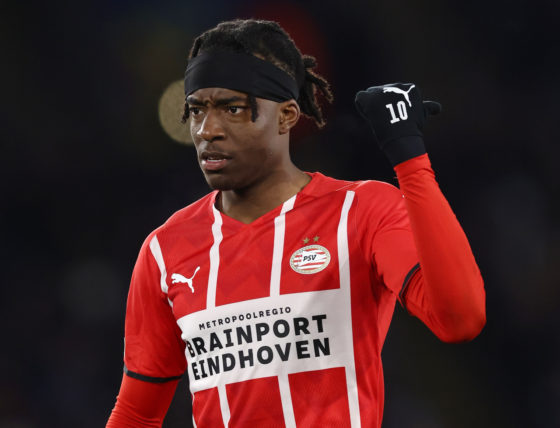 Madueke in action against Leicester City in midweek. Photo: Darren Staples/Sportimage via PA

PSV footballer Noni Madueke has been fined €1,370 and given a community service penalty for driving a car with a forged licence.

Border police stopped the 20-year-old English forward on December 29 near Eindhoven Airport. When asked to show his licence he produced a UK version that had been falsified.

A court in Eindhoven fined him €370 for driving without a licence and another €1,000 for possessing false documents, Omroep Brabant reported. An order to carry out 120 hours of community service was suspended.

Madueke joined PSV from Tottenham Hotspur in 2018 at the age of 16, turning down an offer from Manchester United. Since breaking into the first team two years ago he has scored 18 goals in 67 appearances.

The prosecution service criticised the presiding magistrate for allowing the hearing to be held in private session at the request of his lawyer, Noortje Lot, because of Madueke’s youth and high profile.

‘Holding investigations in public is highly valued and allows the press and the public to scrutinise the justice system,’ a spokesman said.

‘It is especially important in a case such as this because the public needs to be able to see that suspects with a high profile are not treated differently from others.

‘We do not believe an exception should be made because the person in this case is well-known and relatively young.’