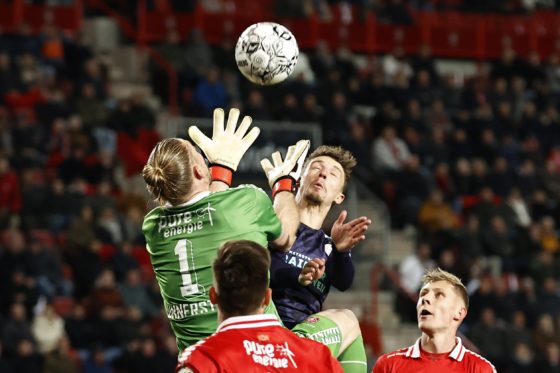 PSV Eindhoven fell further behind in the Eredivisie title race despite staging a dramatic comeback against in-form Twente Enschede.

Twente stormed into a three-goal lead after just 25 minutes as Ricky van Wolfswinkel – twice – and Michel Vlap took advantage of some slack defending by Roger Schmidt’s side.

Joey Veerman pulled one back with a precise long-range shot before half-time, before Cody Gakpo – one of three half-time substitutes – reduced the deficit to a single goal eight minutes after the break.

Lars Unnerstall performed heroics in the Twente goal as he repelled waves of PSV attacks, until Oliver Boscagli outjumped him to score the equaliser deep into injury time.

The result allowed Ajax to go four points clear with six matches to play after the champions carved out a 3-1 win in Groningen.

The hosts went ahead when André Onana misjudged Jørgen Strand Larsen’s curling shot, but Ajax struck twice just before half-time, including a Dusan Tadic penalty, and secured the polnts with Steven Berghuis’s breakaway just before the final whistle.

Feyenoord strengthened their grip on third place as they overcame Willem II with second-half goals from Luis Sinisterra and Bryan Linssen.

AZ Alkmaar drew level on points with fourth-placed Twente and opened up a 14-point gap on the sixth-ranked team, Vitesse, who have won just one of their last eight league matches. Jesper Karlsson set up the first goal for Vangelis Pavlidis and scored the third from the penalty spot to seal a 3-1 win.

Bottom-placed PEC Zwolle looked to be grinding out a precious point in the IJsselderby against Go Ahead Eagles until Belgian striker Philippe Rommens popped up with a curling strike into the top corner in injury time.

Closest rivals Fortuna Sittard were on the receiving end of Heracles’s first away win for a year, while Sparta earned a point against Heerenveen in a match overshadowed by allegations that two of their players, Tom Beugelsdijk and Aaron Meijers, were involved in an illegal betting site.

A 25-metre thunderbolt by Javier Vet gave NEC Nijmegen their first win in six matches against Cambuur Leeuwarden and pushed them into the top half of the table.

Utrecht were denied their first win in five as Michiel Kramer headed in a late equaliser for RKC.