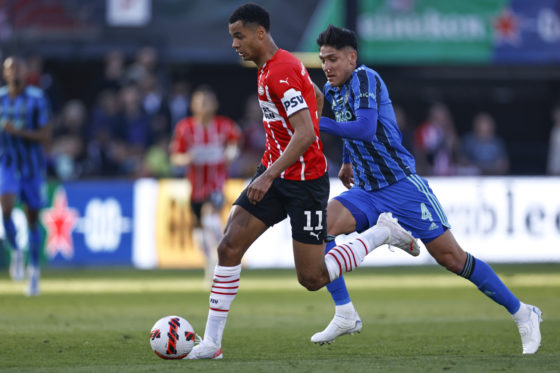 PSV claimed the first silverware of the season as they came from behind to beat Ajax 2-1 in a pulsating KNVB cup final.

The Eindhoven side went behind midway through the first half but turned the match on its head with two goals straight after the break. Davy Klaassen had the ball in the net for Ajax shortly afterwards, but the goal was ruled out for offside and PSV finished the match the stronger team.

The win means Roger Schmidt will not leave Eindhoven empty-handed after two seasons at the helm, while his Ajax counterpart Erik ten Hag, who is expected to join Manchester United at the end of the season, will concentrate on the race for the Eredivisie title, where his team are four points ahead of PSV with five matches to play.

‘It was a big relief to win this cup,’ Schmidt told ESPN. ‘I’m really proud of my team and what they did today. It was a great fight, they always believed in themselves and we deserved to win.

‘We dominated the game in the beginning and then they scored out of nothing, but after half-time we showed a lot of character and quality. They had some chances but overall I think we were clearly the better team.’

A frustrated Ten Hag said his team only had themselves to blame for the defeat. ‘We made two big mistakes at the beginning of the second half,’ he said. ‘We let them counter from one of our attacks and win a free-kick, and then it was 1-1. And we needed to keep Gakpo out wide on the left, and instead he cut inside and scored.’

Ten Hag picked Maarten Stekelenburg ahead of André Onana in goal and left top scorer Sébastien Haller on the bench, giving a starting place to Brian Brobbey. Former PSV winger Mo Ihattaren was included in the Ajax squad for the first time, three months after returning to the Netherlands on loan from Juventus.

PSV made the brighter start and looked to have taken the lead when a shot by Eran Zahavi squeezed between Stekelenburg’s fingers, but the Israeli striker was judged to be offside.

Instead it was Ajax who took the lead in the 23rd minute when Ryan Gravenberch swapped passes with Davy Klaassen before firing a low shot into the corner.

Noussair Mazraoui looked to have doubled the lead just before half-time when he dispatched a neat pass by Klaassen, but the video referee spotted Dusan Tadic had strayed marginally offside in the build-up.

Instead PSV produced an equaliser three minutes after the interval as Ibrahim Sangaré flicked on a free-kick into the path of an unmarked Erick Gutierrez, who headed powerfully home from close range.

Two minutes later the Eindhoven side were in front. A sloppy pass out of defence went straight to Cody Gakpo, who advanced towards the Ajax goal before shooting low into the bottom corner from outside the area.

Ajax poured forward in search of an equaliser and looked to have found it when Brian Brobbey’s cutback was put away by Klaassen, but for the third time in the match the VAR spotted a marginal offside, this time by Brobbey.

A minute later Tadic smacked a shot against the base of the post, while PSV goalkeeper Yvon Mvogo had to be alert to block a shot by substitute Per Schuurs with his foot.

At the other end Bruma missed a clear chance to wrap up the game for PSV after being put clear before substitute Yorbe Vertessen saw his shot come back off the post.

Ihattaren came on for the last five minutes for Ajax, but was unable to write the fairytale ending Ten Hag was looking for before leaving Amsterdam.