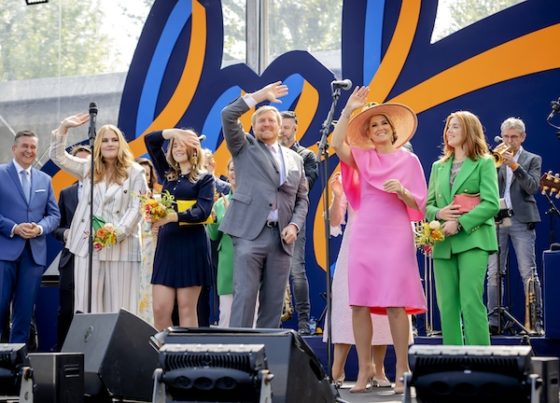 The first old-school King’s Day in three years was celebrated all over the Netherlands on Wednesday, with plenty of orange, beer and fund raising for Ukraine.

Dutch railway company NS said that Amsterdam visitors were back to pre-coronavirus levels, and that some 200,000 people had come to the capital to enjoy the party.

Few people seemed to be aware of the the city council’s ‘one alcoholic drink’ rule although one visitor, carrying a half-empty bottle of wine, told Dutch News he had asked by plain clothes police if it was for his own consumption.

The war in Ukraine was apparent in various ways. On one stall you could throw balls at cans with Putin’s face on them. In other’s children played music or sold cakes and arm bands to raise money for the relief effort.

‘We are really sad about the war, so we are trying to help,’ 11-year-old Muze told the Parool. ‘But so far we have only sold three.’

Utrecht city council said on Twitter that it had been a ‘wonderful night and day’ and praised its team of street cleaners who started clearing up the mess on Wednesday evening.

The royal family celebrated the day in Maastricht, and some 40,000 people travelled to the southern city to catch a glimpse of the king, queen and their three daughters.

There were few problems requiring police intervention, although in Arnhem, reports of a man with a gun caused a temporary panic and in Amsterdam a couple of people had to be fished out of the canals, RTL reported.