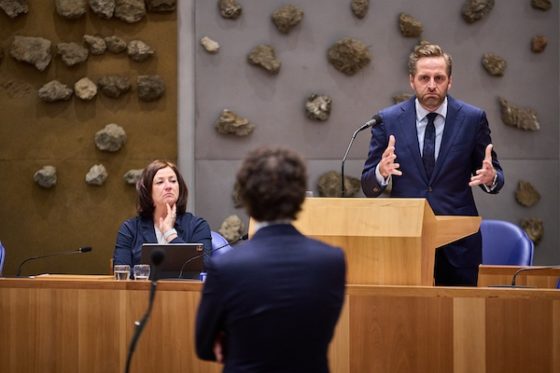 Housing minister Hugo de Jonge has survived a no-confidence vote over his role in the face mask scandal which created three millionaires in a supposedly not for profit deal.

MPs had called a debate on the scandal on Thursday, during which De Jonge repeatedly apologised for giving parliament the full picture about his involvement while health minister.

‘I did have contact with the department about [Sywert[ van Lienden,’ he said. ‘My involvement was not fully made clear and I would like to offer my sincere apologies to parliament for this.’

De Jonge has always denied brokering the agreement but has admitted contributing to the confusion by not being clear about the extent of his involvement.

Emails and text messages which have since been released show the minister had asked civil servants to talk to Sywert van Lienden, a civil servant and prominent CDA member, after he lobbied for access to officials for his HulpTroepen foundation initiative.

It later transpired that the deal – worth €100 million – was carried out out via a limited company which netted €20 million in profits for Van Lienden and his two colleagues.

The emails and text messages make it clear that Van Lienden had lobbied De Jonge hard about his proposal which had generated masses of sympathetic publicity.

‘You can better have that Sywert inside pissing out than outside pissing in,’ De Jonge said in a message to his most senior aide. De Jonge was referencing highly critical social media messages placed by Van Lienden about the government’s mask purchasing strategy.

In another message, a civil servant tells the minister that ‘cuddling up to‘ Van Lienden had become a daily task.

The pressure from the minister resulted in a flurry of phone calls over the Easter weekend and, eventually, a €100m deal, by which time Van Lienden and his two colleagues had already started working on setting up a limited company which would go on to process the order.

A no-confidence vote was supported by 52 of the MPs present, not enough for a majority but enough, according to the Volkskrant, to give the minister a warning.

Discussions about the scandal are not yet over. Deloitte is investigating the affair on behalf of the government and there will be a parliamentary inquiry.

In addition, staffing agency Randstad, which supplied 15 workers free of charge to support the not for profit initiative, has also made a formal police complaint which is now being looked at by the public prosecution department.