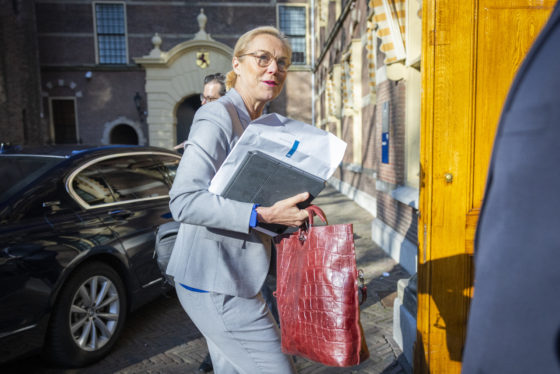 More than 200 members of coalition party D66 have called on the leadership to explain why a confidential report into sexual intimidation by a senior lobbyist was apparently kept quiet for a year.

The Volkskrant reported at the weekend that the investigation into Frans van Drimmelen, a former chairman of D66’s political academy, found he had ‘stalked, threatened and blackmailed’ a female colleague between 2015 and 2016.

Van Drimmelen was given an official warning by police about his behaviour, but not charged, the report found, despite his claims at the time that the investigation had ‘exonerated’ him and concluded that the allegations were ‘unfounded’.

D66 commissioned an external agency in December 2020 to carry out a two-stage investigation into allegations of sexual misconduct. It followed the publication of a blog by Van Drimmelen’s victim, in which she claimed he had told her she could ‘forget about my ambitions in the party’ if she rejected his advances.

The public part of the investigation, which looked at whether there was a broader culture of sexual intimidation in the party, concluded last February that there was ‘no question of an institutionally unsafe environment,’ D66 leader Sigrid Kaag said at the time.

Kaag was said to have been unaware of the contents of the confidential report, which was commissioned by the party management, but the Volkskrant reported that the woman concerned made three attempts to contact her between December 2020 and April 2021. Each time she was referred to the party’s lawyers.

More than 200 members have now signed an open letter calling on Kaag and the party management to issue a statement by the end of the week to clarify what steps they have taken or intend to take in response to the investigation.

The members also asked for a redacted copy of the report to be made available and called for a meeting with the party leadership and management within three weeks.

‘By not taking action the management has severely damaged the trust between the party and its leadership on the one hand and its members and voters on the other.’

The D66 leaderhip has since said it would ‘present its conclusions’ on the matter on Friday.

The Volkskrant reported that the woman who complained about Van Drimmelen received a copy of the confidential report on the day of the general election on March 17 last year, leading her to suspect that it had been held back to avoid damaging D66’s election campaign.

The Volkskrant said Van Drimmelen unsuccessfully tried to obtain an injunction against the newspaper to prevent it publishing details of the allegations against him.

On Monday corporate communications agency Dröge en Van Drimmelen, where Van Drimmelen is a partner, said he had temporarily stepped back from his role following the Volkskrant’s revelations. ‘The situation is extremely painful, sad and damaging for all concerned,’ the agency said in a statement.