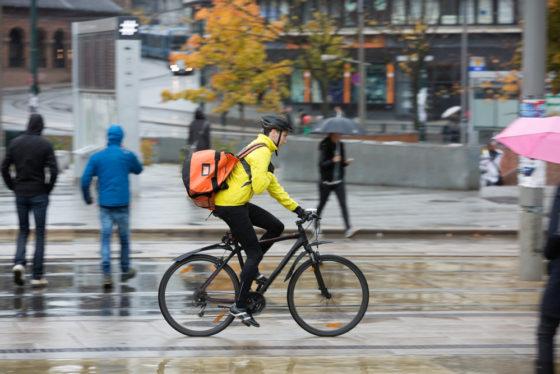 Road safety watchdog SWOV has called for cycling helmets to be made compulsory for everyone over the age of 60 to cut the number of serious injuries.

Figures published this week showed that while deaths in cars have dropped by 70% since the turn of the century, the casualty rate among cyclists was virtually unchanged.

More cyclists now die per year than any other type of road user, while serious injuries have gone up by 18% in the past decade.

‘Cyclists are still very vulnerable,’ SWOV director Martin Damen told AD.nl. ‘People’s balance gets worse after the age of 55. So they shouldn’t wait so long to start wearing a helmet. A bike helmet from the age of 60? I’d say: do it.’

Statistics show over-60s are more likely to be killed on the roads than younger people, Damen said, with the age group accounting for half of all road deaths and three-quarters of cycling fatalities.

Safety body VeiligheidNL said two-thirds of accident victims treated in hospital were cyclists, with one in four suffering a brain injury.

Damen said making helmets compulsory was the quickest and cheapest way to reduce all road deaths, but accepted that it would meet strong resistance in a country where only around 3% of cyclists currently wear one.

‘It messes up your hair and there aren’t so many accidents in the Netherlands that people see cyclists being killed all around them,’ he said.

But unless wearing helmets becomes the norm the Netherlands has no chance of meeting its target of halving all road deaths by 2030 and eliminating them by 2050.

‘We have a real cycling culture in the Netherlands which sees helmets as a nuisance and nannyish, but for people over 70 especially a helmet can be very important for preventing fatal injuries.’

The issue is expected to be raised during a debate in parliament next week on road safety with infrastructure minister Mark Harbers.