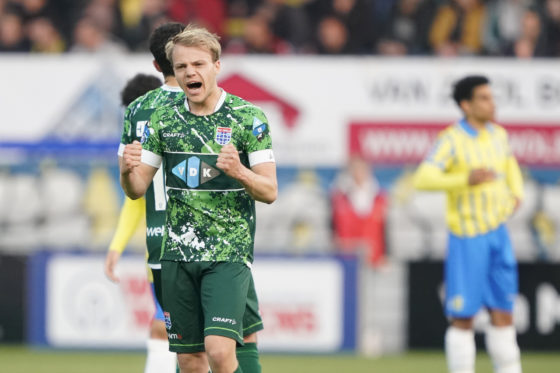 Ajax stayed on course to retain their Eredivisie title with an unconvincing late win over NEC Nijmegen.

In the week that Erik ten Hag’s departure for Manchester United was confirmed, the Amsterdammers had to wait until the 88th minute, when Brian Brobbey bundled the ball into the net, to claim the points.

Rivals PSV Eindhoven also made hard work of their match at out-of-form Cambuur, who took an early lead through Patrick Joosten’s neat backheel. Eran Zahavi levelled just before the interval and Mario Götze headed the winner after 65 minutes to keep PSV’s faint chances of snatching the title alive.

The real drama was in the relegation zone, where three of the bottom five teams won to bring them within four points of each other.

PEC Zwolle moved up to 16th place with a 2-0 win at RKC Waalwijk, who are just two points ahead of them. The VAR panel played a big part in PEC’s second goal, overturning a yellow card handed to Daishawn Redan for diving in the penalty area.

Referee Jochem Kamphuis rescinded the card and awarded a penalty to PEC, which captain Bram van Polen put away to add to Thomas van den Belt’s surgical strike in the first half.

Fortuna Sittard followed up their 3-0 win over fellow strugglers Sparta by beating Go Ahead Eagles 1-0, Zian Flemming scoring the decisive goal with a shot that took a big deflection before looping in over the head of Andries Noppert.

Sparta are a point adrift at the bottom after they were unable to match Twente Enschede, for whom Ricky van Wolfswinkel claimed his 15th goal of the season.

Twente stay within three points of third-placed Feyenoord, who have a European Conference League semi-final match coming up on Thursday against Olympique Marseille.

The Rotterdammers needed a 96th-minute goal by Luis Sinisterra to claim the points against Utrecht, in a match which leading scorer Guus Til missed through injury. ‘It wasn’t a good match, but it was a good result,’ said coach Arie Slot.

Heracles won 1-0 in Groningen to stay in the hunt for a European play-off spot, while AZ managed a late win against Heerenveen to seal a top-five finish.