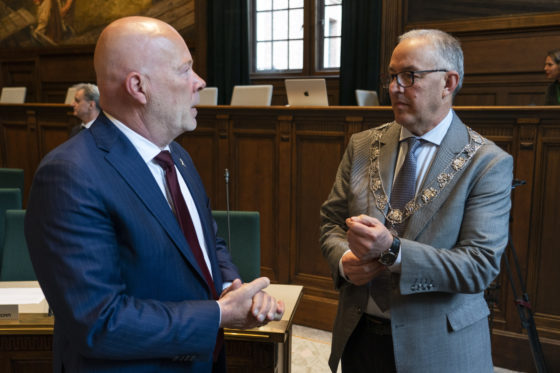 Right-wing populist party Leefbaar Rotterdam is in talks to lead a four-way coalition in the port city with the support of Denk, whose support is concentrated in the city’s Turkish minority.

The unorthodox partnership would also include the two liberal parties, the VVD and D66, after the quartet met for the first time last Thursday.

Former social affairs minister Wouter Koolmees, who brokered the coalition deal in The Hague that secured Mark Rutte’s fourth term as prime minister, has been appointed to lead the exploratory round of negotiations.

Leefbaar, the party founded by anti-Islam politician Pim Fortuyn, increased its vote share to 20% in last month’s municipal elections, cementing its status as the largest party.

The proposed alliance with Denk, which has a high proportion of Muslim voters and has come under scrutiny for its links with the Turkish government, reflects Leefbaar’s determination to avoid a repeat of 2018, when it was shut out of the city government.

Leefbaar currently have 10 seats, while the VVD, D66 and Denk have six, five and four respectively, giving the four parties a working majority on the 45-seat council.

Local Denk leader Faouzi Achbar said the combination was not just a bridge between liberals and populists, but also between ‘Hillesluis and Hillegersberg’ – the affluent north of the city, where VVD and D66 are dominant, and the suburbs south of the Rijn, where support for Leefbaar and Denk is highest.

Vincent Karremans, leader of the city’s VVD group, told Rijnmond: ‘We’ve been able to work very well with all these parties in the last administrative term.’

But Richard Moti, head of the local Labour (PvdA) party faction, said the talks were a blow for hopes of a progressive coalition. ‘This is the most conservative variant possible, while Rotterdammers voted strongly for progressive parties,’ he said.